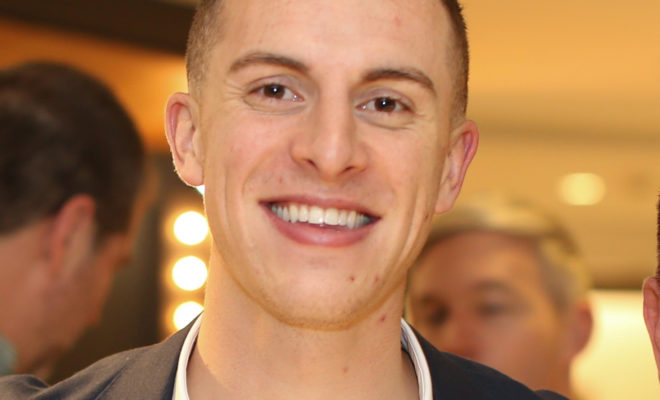 Ben is a leader in LGBT advocacy, the fair trade movement, cultural diplomacy, and an entrepreneur. As a proud gay entrepreneur, he is a member of the National LGBT Chamber of Commerce of New York (nglccNY).  Ben’s Five North Chocolate is a Certified LGBT Business Enterprise® creating Fair Trade Certified™ snacks. They were also a proud sponsor of nglccNY’s 10th Anniversary Gala.

As an advocate for fair trade, he has worked with local, national and international businesses and organizations to drive positive economic impact to marginalized farmers, artisans and producers in the developing world. He delivered a successful TedX talk on fair trade with almost 70k views and has been named by Fairtrade International one of the Top 10 Biggest Fair Trade Advocates in the World and #1 in the U.S. Ben’s passion for fair trade has taken him on-the-ground to fair trade farms in Ecuador and artisan workshops in India.

He is active with the leadership organization One Young World and was recently featured on BUILD Series NYC and named Ambassador of the Month. He is also an alumnus of the 2016 Clinton Global Initiative University for his Commitment to Action in global poverty alleviation and is a 2018 CGI U Honor Roll Recipient. In 2016-17, he was 1 of 75 young professionals selected for the 33rd Congress-Bundestag Youth Exchange to represent the US in Germany for a year-long diplomatic, cultural exchange, funded by the Department of State. There he was named the German National Champion at the Global Student Entrepreneur Awards.

Ben’s burning question—2 billion people in the world live on less than $2 a day, so, how can we fight global poverty? — his answer “through fair trade!”  As soon as we take our first sip of coffee or tea in the morning, we are participating in the global economy, according to Ben, and we have a choice.

As a social entrepreneur, he truly believes in the power of business to create positive impact for all stakeholders including producers, farmers, manufacturers, suppliers, retailers and even consumers. As someone who has seen poverty in the developing world, he wanted to create impact through fair trade. And as someone who lives in a world where LGBT equality is in jeopardy, he wanted to be a voice that uplifts the community. As a proud, gay entrepreneur, he wants to prove it isn’t despite our diversity and differences in background and culture that we are able to work together. But, instead, that this diversity should be celebrated for the immense value it creates within our community, economy, and lives.