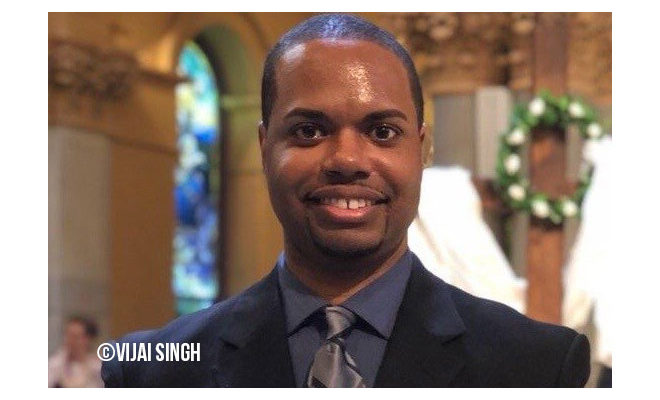 Bryan Jablonski Johnson’s life and experiences demonstrate a long-standing history of servant-leadership. His career and personal life revolve around service to others. At work, he is the accessible media manager for the CBS Corporation. Outside of work, he is a “Big Brother” with Big Brothers/Big Sisters of NYC to a self-identified gay teen. He is a founding co-chair of the Xavier Mission associate board, an organization providing basic services as well as opportunities for empowerment and self-sufficiency to New Yorkers in need. He is also a delegate with NYC Participatory Budgeting where he works with his city councilman to help his community spend $1 million of taxpayer money on community-wide improvements.

Bryan started off working behind the scenes in news production on the local and later at the national level. In network news, he worked on stories ranging from the opioid crisis to tributes to fallen American soldiers, to Election Night coverage. After six years of news, he moved into compliance and eventually took on the role of Accessible Media Manager.

In this role, his responsibilities include making sure disabled American viewers have full access to CBS entertainment, news and sports. He oversees the development of captioning policy as well as the video description policy and its strategic execution for the CBS Television Network, its affiliates and Internet distribution platform partners.

In addition to ensuring ability-challenged Americans have full access to entertainment and information under the law, Bryan cares deeply about the New York City community. As a mentor with Big Brothers, Big Sisters of NYC he recently received the 2019 “Big Impact” Award for his devotion to his mentee, who identifies as gay. This was through the BBBS of NYCs employee engagement program at CBS Corporation.

Bryan is also a founding co-chair of the Xavier Mission, Inc. associate board. Xavier Mission provides basic services as well as opportunities for empowerment and self-sufficiency to New Yorkers in need. He is an active Delegate with NYC Participatory Budgeting where he works with his city councilman to help his community spend $1 million of taxpayer money on community-wide improvements.

Due to term limits, the NYC City Council will no longer have LGBT representation come 2021.   Bryan has his eye on the future and ultimately running for office in NYC to represent his community. He is an incoming participant of Coro Leadership New York where he will learn at the nexus of business, government and non-profit how to make New York City a more equitable city for New Yorkers. He is passionate about creating and implementing policies that can impact the lives of millions of New Yorkers. More specifically, he’s interested in how public-private partnerships are formed and how they can be utilized for a more equitable city.

Bryan makes time for family, friends or anyone who needs sage advice. He is empathetic, smart and big-hearted. He is held in high regard by his friends, colleagues and the community. Bryan says, “I feel like I am just scratching the surface of my leadership potential. I look forward to being an LGBT leader of impact for years to come.”

He strongly believes in giving a voice to the voiceless because as a teen growing up in South Carolina he felt he didn’t have a voice. “I didn’t know anyone who was openly gay. I didn’t have any LGBT role models,” he said. Even with growing up in a loving home, he still felt like “I had to keep my true self a secret.”  Today, he wants kids, especially ones of color, who perhaps live in a community where they feel like they can’t be themselves to “find a role model in me… I represent them.”