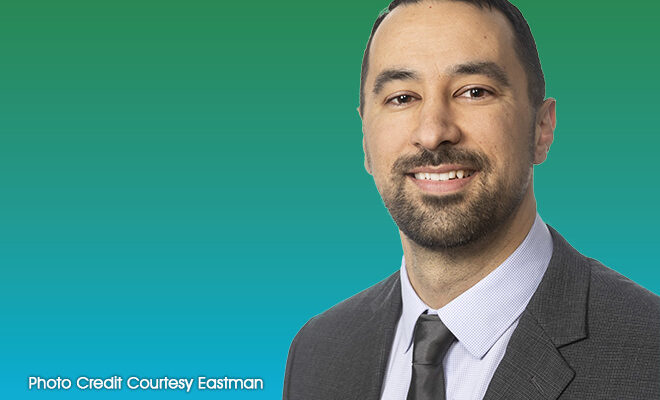 In times of crisis, it is of paramount importance to lead with compassionate integrity — both with our words and actions. By building honest bridges of understanding between oneself and others, the compassionate leader helps navigate their community through uncertainty.

George Chamoun is purpose-driven and relationship-oriented, with a life mission to champion initiatives that simultaneously benefit people, businesses and communities. By day George is a Business Process Excellence Manager in Specialty Plastics at Eastman, a global specialty materials company, where he builds bridges of communication to drive process improvements as well as opportunities for efficiency and growth. Born in New York City, Chamoun split his childhood between the U.S. and Lebanon with his father’s family. He holds advanced degrees in both Mechanical Engineering and Business Administration and he has a PhD in Aerospace Engineering.

As a licensed Professional Engineer, and business and community leader, George Chamoun demonstrates his ability to tackle complex, multidimensional problems and effectively communicate pragmatic solutions to key stakeholders and the community on a daily basis. Through his employee resource group and community leadership experiences, he has had the privilege of leading meaningful change and moving the cultural needle both at work and in the broader community.

Chamoun was born in New York City to an American mother and Lebanese father. After their divorce, he moved with his father to Lebanon until he was 8.  In Lebanon, his father remarried.  Chamoun spent time stuck in bomb shelters in Lebanon due to a civil war between Christians and Muslims. His family fled by boat during the night to Cyprus.  They remained in Cyprus a short time before returning to New York for 6 years.  But, Chamoun had to move back to Lebanon with his family as they cared for his step-mother’s aging parents. Chamoun graduated from high school in Lebanon in 1999.

Upon graduation, Chamoun pursued higher education in southern California to be close to his mother. He pursued aerospace and mechanical engineering and obtained his bachelor’s, master and doctoral degrees from the University of Southern California. He worked at Virginia Tech for a year where he developed a love for the mountains, hiking and local music and decided maybe big cities weren’t for him after all. Eventually, he found his way to Eastman in Kingsport, TN, his home for almost a decade now. Northeast Tennessee had a challenging start but blossomed into something he would have never anticipated. He became a widely recognized LGBT face at work and in the broader community because of a newspaper feature describing him as “an adventurer that aims to promote acceptance and inclusion.”

After a long struggle with deciding to be out at work, in 2016 Chamoun found himself at a crossroads—he needed to be fully out of the closet or move to a more progressive city.  Living with his partner in the TriCities area of TN was far different than the places he had lived in before.  The community was far more socially conservative and his decision to protect his career and live closeted eventually became unbearable. He decided to be out at work.

Once out at work he was pleasantly surprised by the support he enjoyed in the workplace and he soon jumped into community leadership to help organize and strategize around LGBTQ causes in the surrounding communities. By 2017, Chamoun founded the nonprofit TriPride. TriPride’s mission is to build a more inclusive community for LGBT persons in partnership with local businesses.

In 2018 and 2019, over 10,000 were in attendance at TriPride’s parade and festival in downtown Johnson City and Kingsport. The events have been described in the media as “emotional” and “historic”—and able to draw compelling support from the community. TriPride enjoys financial assistance from nearly every major regional employer, including Eastman, as well as many local small businesses and individual donors.

Chamoun showcased his workplace leadership bona fides when stepping forward as head of Equality, one of Eastman’s Employee Resource Groups, in 2018. They have successfully enacted real policy changes companywide that directly benefit LGBT employees and beyond under his leadership. Their successes include the extension of health benefits to unmarried same- and opposite-sex couples, parental leave equity, the use of personal pronouns in the company’s official email signature line and adoption privileges.

During Chamoun’s tenure as leader, Equality has been recognized by the Public Relations Society of America, TriCities chapter, with an “Award for Excellence” for their Pride Month Video Series. Recently Chamoun was unanimously nominated to join the Kingsport Chamber of Commerce’s 2021 board of directors. His goal for the next decade is to continue to build on the progress made in the rural corner of Northeast Tennessee, by being visible in the workplace and surrounding community, and by facilitating high-visibility community engagement events like the TriPride celebration.  He is hopeful his efforts will convince other LGBT people that Northeast Tennessee can be their home, too.