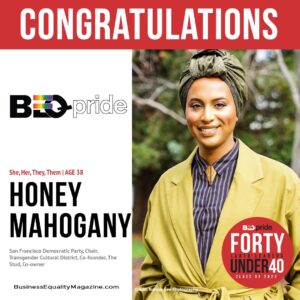 Fighting every day for a more just and equitable San Francisco: fighting for affordable housing; championing small business; standing with teachers, nurses, and labor; protecting our environment and making sure that everyone has a place in the Democratic Party.

The child of East African political refugees, Honey Mahogany was born and raised in San Francisco. Honey’s father worked as a cab driver for Yellow Cab Co-op and Honey’s mother put herself through school while raising two children and eventually worked in finance.

Honey completed most of her education in the Bay Area and received her Master’s degree in social welfare from UC Berkeley in 2009. Soon thereafter, Honey got a job working at the Rainbow Community Center of Contra Costa County (RCC) where she worked as the Community Mental Health Director and became the center’s first full-time employee.

It was around this time that Honey Mahogany was also establishing herself as a performer in San Francisco, eventually garnering international attention when she appeared on the television show RuPaul’s Drag Race. Since appearing on the show, Honey has become a regular host at San Francisco Pride and has also launched two successful POC-centered LGBT events: Mahogany Mondays & Black Fridays.

In 2016, when the Stud Bar was threatened with closure, Honey joined a group of her friends in establishing a collective that eventually took over ownership of the space and worked with City Hall to Save Our Stud. This effort lead Honey to get further involved in community organizing, and soon Honey began helping to mitigate displacement in one of San Francisco’s most diverse and heavily impacted neighborhoods, the Tenderloin, by founding Compton’s Transgender Cultural District.

Realizing the incredible value of civic engagement, Honey joined the Harvey Milk LGBTQ Democratic Club and became co-president of the club a year later. Honey was then appointed to the San Francisco Democratic County Central Committee (SF DCCC), becoming the first black trans-identified person to serve on the body.  Honey continues to organize and fight for the most vulnerable communities in San Francisco every day in the District 6 Office, and she will be continuing her service on the SF DCCC as Chair.