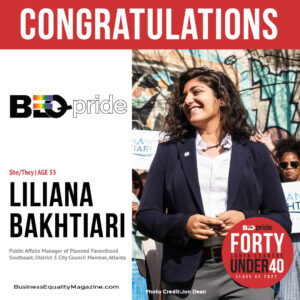 As a Brown, Queer Woman, by just existing in this political climate, I will be pushing the definition of diversity in politics forward.

Liliana spent most of her youth years pursuing her passions: traveling the world and becoming a social advocate. She participated in archaeological excavations in Kenya, joined political rallies in France and trekked through Southeast Asia where she assisted with cultural studies on genocide and Buddhist culture in Cambodia. Along the way, she made her living doing everything from caring for orphaned kangaroos in Eastern Australia, to harvesting fruit in the rainforest. Her activist work has included aiding refugees in building new homes, working with sex trafficking victims and volunteering at orphanages. She captured her experiences through photography, film and writing, which became an integral part of her journeys. Currently, Lilliana hopes to make global epidemics relatable through the stories of everyday people

“Rather than overwhelm people with statistics and stories of heartbreak, I hope to show them people who are surviving day to day. I want to give these stories a face, not just numbers. If I can show readers that these survivors are people who laugh, cry and bleed just like they do, perhaps the issues stop being so unknown. Perhaps people stop willingly choosing ignorance and start getting invested and educating themselves.”

In 2017, Liliana ran a municipal campaign for Atlanta City Council as a first-time candidate, receiving 23 endorsements after launching and managing a multi-platform media campaign with over 20,000 person reach, planning 30+ events and raising $132,000. She received 49% of the vote, narrowly losing to the incumbent. Liliana’s campaign elevated her profile in Atlanta with state representatives/legislators, neighborhood captains, religious leaders, business owners and city planners. In 2021, she ran again and secured the trust of over 68% of Southeast Atlanta voters.  Liliana Bakhtiari is now the first queer Muslim elected to any office in Georgia and the first non-binary person to be elected into the Atlanta City Council.

She continues her work outside of political candidacy by remaining active in Atlanta through different social and political initiatives of impact. She recently launched a mobile art installation in the form of a Georgia school bus, targeting voter mobilization using hope as a stronger tool than hate. Painted in collaboration with Living Melody Collective, the bus toured Georgia, engaging suburban and rural voters and inspiring them to make their voices heard during a critical election season.

Professionally, Liliana served as the Public Affairs Manager of Planned Parenthood Southeast, assisting the VP of Public Policy in our overall goal of increasing public and legislative support for Planned Parenthood’s mission. Most recently, she served as Emergency Homeless Response Coordinator for Partners for Home during the initial COVID-19 outbreak, where she managed an operation utilizing vacant hotel space to provide housing to individuals experiencing homelessness who were at high risk or tested positive for coronavirus. Liliana was instrumental in developing programming to assist individuals who struggle with addiction as they worked to place them in more permanent housing.

Liliana earned a bachelor’s degree in anthropology and journalism/telecommunications with a minor in political science at Georgia State University. She is a board member for the following organizations: GloATL, Victory Fund, WinList, Georgia Equality (also a chair of the Advancement Committee) and a Governor for Red Clay Democrats.