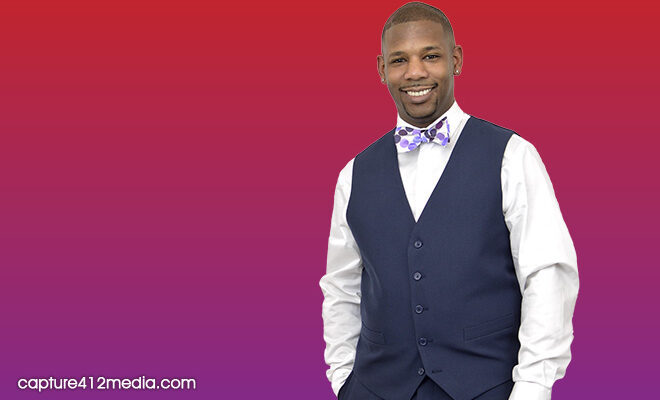 We don’t see George Floyd or Tony McDade as our neighbors. We don’t see them in our family, friends, at school or at work. My work is on uplifting people from the margins of society’s “-ism” intersections who are overwhelmingly Black, Latinx, LGBTQ+ immigrant and poor.

Omari Jahi Aarons is the founder and managing partner of Aarons Group LLC, a consulting firm that helps people and companies embrace disruption through a DEI lens. He recently joined the board of directors for Big Brothers Big Sisters of Eastern Massachusetts. He is a Howard Thurman Fellow at Boston University School of Theology, a licensed minister and recently named one of Ten Outstanding Young Leaders by the Greater Boston Chamber of Commerce. Aarons lives in Boston with his partner Craig.

Aarons says his mission in life is “helping to heal divides through love as the most powerful and unifying force, particularly for those of us who live in the intersection and can no longer be invisible.”  Aarons’ nominator says he is a “truly fantastic human being and always has been.”  When reviewing his many accomplishments, work history and passion for diversity, equity and inclusion work you can’t help but be inspired by this amazing young leader. From what he has shared, he realized his power at the intersection of being Black and LGBTQ+ identifying, two parts of his identity not openly represented or celebrated in his early career. Aarons stepped into leadership standing tall in his truth and refusing to be invisible all while knowing his courage will inspire others to do the same.

For the past 13 years, Aarons has been a champion of equality, equity, and inclusion in the places he has worked and in the cities where he has lived. When he started his career he was out to a select group of close friends. Not unlike many, as he looked for people he could identify with amongst the leadership at work there were no examples of lesbian, gay or transgender people and very few who were Black. Living and working openly as both of these identities was a walk of faith and knowing met with an opportunity to shine. When one of his previous employers identified a need for LGBTQ employee resource group, Aarons tentatively took on the responsibility.

He wasn’t sure he or the company was ready for the change required to found and lead an LGBTQ employee resource group. And, that’s what makes Aarons’ success so sweet, tackling the unknown by tapping into your truth is empowering for many.  Aarons admits the experience helped him reveal parts of his truth he didn’t realize were hidden. He had often “felt pulled to be either Black or gay”, as if he existed in parts and not as a whole in many spaces. The sweetness is in knowing what self-empowerment is. For Aarons, it has something to do with defining and establishing what he felt was missing.  Being the change the world—his world—needed to see. In his words, “As the world begins to embrace intersectionality in a different way, I hope that over the next decade a person entering a workplace can look up and know that they belong and that they have a future, because someone like me is there: out, proud and successful, and they’ll know they can be too.”