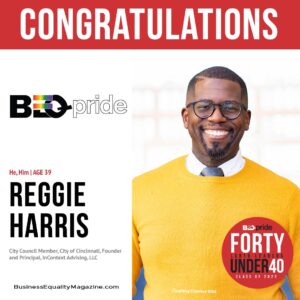 As a clinical social worker, I witnessed my clients work tirelessly to improve their life circumstances. Despite this work, they are often met with larger systemic barriers that can’t be overcome with grit and resilience alone. As a Cincinnati City Council Member, I believe it is our shared responsibility to solve structural and systemic issues that perpetuate poverty and discrimination in order to address the mental health issues plaguing our community and to begin to rebuild strong, people-centered, vibrant communities. Municipal policy has the most direct impact on our lives, and with our newly elected mayor and council, Cincinnati can pass progressive municipal policy that values people over paperwork from top to bottom and cultivates an engaged citizenry that is empowered to lead and shape the city.

Reggie’s story begins as an only child in a large, tight-knit, extended family. He was raised in an environment of entrepreneurs – his mom braided hair, his uncle owned a dance studio, his grandmother and great aunt drove an ice cream truck, his mom’s cousin owned a restaurant and his uncles started a real estate development company. His uncle even helped produce the Cha-Cha Slide. They invested in people, in their communities. All of these businesses took place in Black communities, places where they lived and worshipped.

The importance of this community has impacted Reggie deeply. It taught him that, when given a shot and the proper resources, people will give you their best. It also drove him into the career of social work, where he could continue to invest in people in the same way his family did in him.

He is a transplant to the city; his work as a licensed independent clinical social worker brought him here with his husband in 2015. Prior to becoming a social worker, he had a ten-year career as a professional ballet dancer performing with the Joffrey Ballet of Chicago, Ballet Austin and River North Chicago Dance Company.

Since moving to Cincinnati, Reggie has invested heavily in the city that welcomed him with open arms. He currently works as the Director of Community Life for a nonprofit affordable real estate developer, The Community Builders (TCB). Here, he identifies, develops and manages partnerships and programs that support low-income residents in the areas of health, education, income and asset building.

In January 2020, Reggie was appointed to the Board of Directors for the Cincinnati Metropolitan Housing Authority (CMHA) and currently serves as the board chair for Equality Ohio, the state’s leading LGBTQ civil rights organization. He is a precinct executive for the Hamilton County Democratic Party, as well as a member of the executive committee.

As an educator and social worker, Reggie witnessed his students and clients work tirelessly to improve their lives and circumstances. Despite this work, they were still met with larger systemic barriers that could not be overcome with grit and resilience. This has revealed an unfortunate truth: many of the solutions we propose to aid our most vulnerable only address symptoms of larger, systemic issues. He understands that we need to address structural and systemic issues in order to truly address the impact of trauma.

His work addresses symptoms of poverty and discrimination, and he is committed to embedding the understanding of the interconnectedness of trauma on people’s lives into City Hall. He’s a therapist, and his experiences have all led him to the conclusion that we must start valuing people over paperwork from top to bottom.