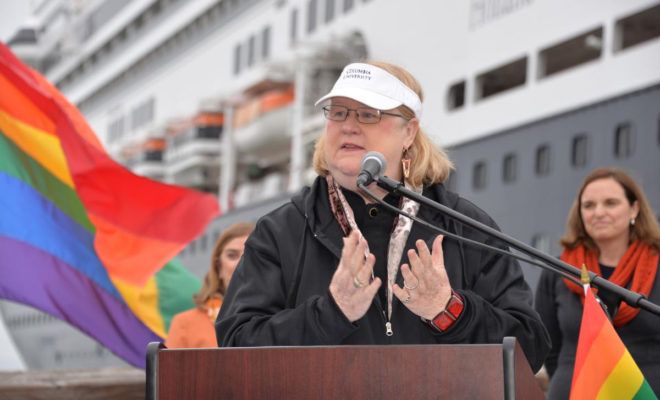 My mentor Judith D. Hines is a wise woman. She said to me, “Good things happen when you get people around a table.” That thought has spurred my desire to help others find each other and overcome isolation. Judy knew how to bring people together.

(Editor’s Note: The following narrative is in Betty’s own words.)

Growing up in Mississippi during the 1950s and 1960s and realizing I was different, my sense of being isolated was strong. No role models were visible other than those I could see in media reports of Pride parades after they began in the early 1970s. My sources to hear about the emerging “gay movement” were ABC, CBS and NBC evening news and popular magazines Ms. and Psychology Today. Looking back over the past four decades, I can recall saying many times while standing in front of rooms full of people all over the world that “the media saved my life” by giving me the information I needed to know that my parents couldn’t tell me.

The setting for my actual coming out story evolved from the Delta of Mississippi to Memphis, Tennessee, where I served as president of the Memphis N.O.W. Chapter during the ERA ratification campaign. Our band of lesbians and a few allies founded a softball team and organized buses traveling to ERA marches. My career in newspapers developed concurrently.

I spoke at all Black schools and colleges, “white flight” schools and others in Mississippi, Tennessee and Arkansas about the importance of reading newspapers and watching TV news to gain the information needed to be in control of one’s own life and to overcome isolation and the bigotry. After graduate school in New York City and the evolution of my media career in Washington DC, I was recruited to the national board of PFLAG where my advocacy for LGBT rights blossomed. My role was two-fold: (1) diversify the board composition; (2) represent the views of LGBT people in a group composed predominantly of privileged White parents.

Relocating to San Francisco, I joined the LGBT chamber of commerce known as the Golden Gate Business Association (GGBA). I also accepted the challenge to help revitalize a nonprofit promoting social and business networking for lesbians. The internet was new and I had brought with me an understanding of how email lists can be used for networking. Our “Betty’s List” email system has operated since 1996, still operating today as a networking tool. In 2011, the publisher of the San Francisco Bay Times was retiring. She asked if I would be willing to take the leadership of this long-standing LGBT community newspaper founded in 1978. Since 2011, working with my partner Jennifer Viegas, who is co-publisher/editor of SFBT along with me, I have focused my attention on keeping this important editorial voice alive and bringing to it the diverse team of contributors we work with.

Our newspaper includes content by and for high school students, LGBT seniors and the multi-generational readership. Our newspaper has always been committed to promoting unity and to including information for men, women, transgender and all identities. Most recently, we have founded the Castro Street Cam showing 24/7 live streaming views of rainbow flags, protests and celebrations. Now LGBT people throughout the world who feel isolated can watch Castro Street and be inspired knowing they’re not alone. We’re here.

Dr. Betty L. Sullivan is the co-publisher/editor of the San Francisco Bay Times and its related digital news platforms, including the “Betty’s List” e-blast system and the Castro Street Cam (www.http://sfbaytimes.com/castro-street-cam/). She has more than 35 years experience in education, mainstream and LGBT media and nonprofit management. She has received numerous awards, including the Distinguished Alumni Award from Columbia University Teachers College in New York City. She has worked for The New York Times, USA Today, San Francisco Chronicle, News Media Alliance and others.