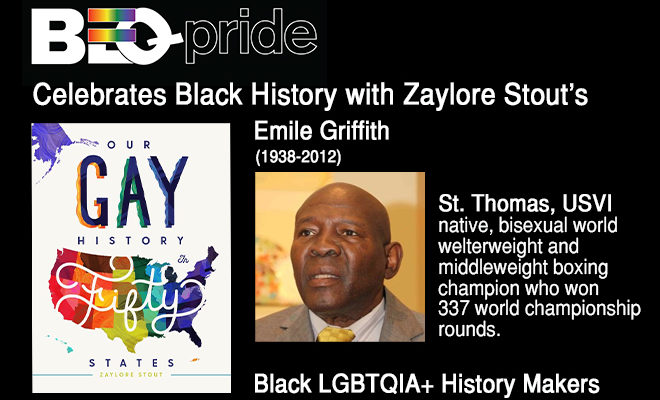 Emile Griffith (St. Thomas, USVI) was a bisexual world welterweight and middleweight boxing champion who won 337 world championship rounds. Born in 1938, he worked as a stock boy in New York City, working largely with women’s hats before being encouraged to start boxing by trainer Gil Clancy. Griffith’s career was haunted by the death of his opponent Benny Paret, who died from his injuries ten days after their 1962 match.

But it was his relationships with men and his support of the Hispanic gay crowd in New York City that drew condemnation from the boxing community. Reflecting on his career, Griffith has said, “I keep thinking how strange it is . . . I kill a man and most people understand and forgive me. However, I love a man, and to so many people this is an unforgivable sin; this makes me an evil person.”