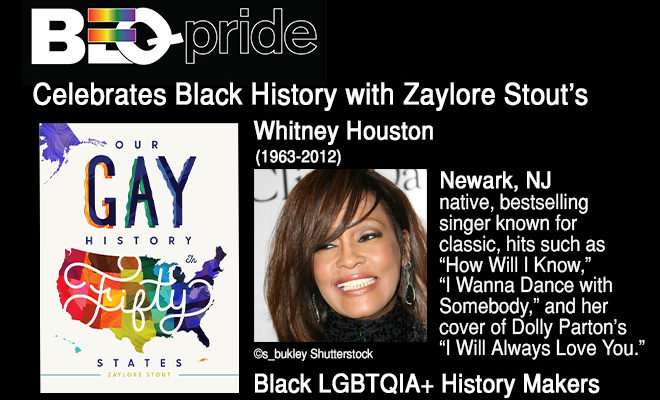 Whitney Houston (Newark, NJ) was a bestselling singer known for classic 1980s and 1990s multimillion-selling hits such as “How Will I Know,” “I Wanna Dance with Somebody,” and her cover of Dolly Parton’s “I Will Always Love You.” Houston was the daughter of Aretha Franklin’s backup singer Crissy Houston and the first cousin of Dionne Warwick and spent her early career years backing up singers such as Chaka Khan.

In her later years, Houston became known for her turbulent 1992 marriage to singer Bobby Brown and for her struggles with drug dependency. She died in 2012 at the age of forty-eight, having drowned in a bathtub as the result of drug use and heart disease.

Houston was long speculated to be a lesbian or bisexual based on her close relationship with her childhood friend and assistant Robyn Crawford, but in 1999 she told Out magazine, “[That] ain’t me. I know what I am. I’m a mother. I’m a woman. I’m heterosexual. Period.” In his 2016 memoir, Every Little Step, Brown confirmed that Houston was indeed bisexual.