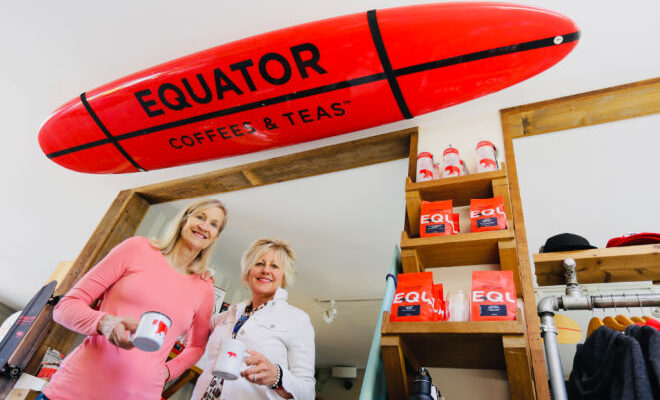 Equator Coffees is ready to build back better

By Melissa Lowery
Photos by Nate Fong and Jordan Rosen

In 2016, San Francisco-based Equator Coffees was named the Small Business Administration’s Small Business of the Year, the first LGBT-owned business to receive that distinction. Co-owners Helen Russell and Brooke McDonnell were “over the moon,” they told us when we featured the duo and their business in the inaugural issue of BEQ Pride.

“When you’ve been working as hard as we have for so many years, to have that acknowledgment, and to represent the LGBTQ community, we’re so proud,” Russell said at the time.

Four years later, Russell is still proud of the accomplishment.

Since then, Russell, McDonnell and Equator Coffees have built on the foundation that brought them recognition from the SBA.

When we featured Equator Coffees in the first issue of BEQ Pride, the company consisted of three retail cafes, a roastery, a growing wholesale business and a farm in Panama that had just produced its first small harvest.
Since then, Equator expanded to seven retail cafes and the wholesale side of the businesses grew to include restaurants, cafes and tech giants like Google and Twitch. The farm in Panama, Finca Sophia, now yields award-winning beans that bring record-setting bids at auction (see sidebar).

Russell and McDonnell worked hard to ensure their staff was taken care of with fair compensation and full health insurance coverage. Plans were underway for further expansion.

“We have been shaken to our core,” Russell said. “When you think about what we’ve lived through in the last six months…”

“We closed before we were told because we were following the scientists,” Russell said. “It’s been super challenging on a lot of levels. We had to make hard decisions, but they were the right decisions for us, for our employees, for our customers, so there’s a company for them to come back to.” 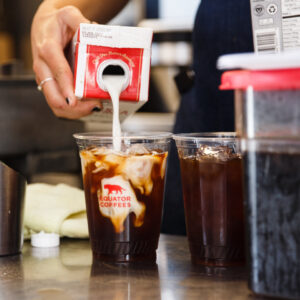 As of September, six Equator cafes have reopened although occasionally they are closed due to the poor air quality from raging wildfires in the area.

“When the air quality index is so bad that you’re employees don’t feel comfortable going outside, you have to respect that,” Russell said. “If you’re a company that cares about your employees, you walk that line between caring for them and being there for customers who are used to you being open.”

One cafe, located inside LinkedIn headquarters, is still closed as most employees work from home. Another cafe is closed permanently.

As Russell and McDonnell were making the necessary moves to secure Equator’s future during the pandemic, the country erupted in protests over racial inequality and police brutality. This caused another seismic shift as Equator’s leadership grappled with the realization that the company was not as inclusive as they thought.

“We’re not anywhere close to where we want to be on the inclusion scale,” Russell said. “It never occurred to me, that being a woman, a gay woman, a white woman – I can hide being gay. I have all these privileges I didn’t know I had. I feel naive about that. It’s been a wake up call, not just for Equator but for all of us. We have to be more inclusive, more diverse, more actively antiracist.”

The Big Crawl Back

A pandemic infecting millions and killing hundreds of thousands, a new reckoning with centuries of systemic racism and, for residents in Northern California and the Pacific Northwest, devastating wildfires – 2020 has been “shocking” for the Equator team.

And yet, Russell is encouraged and hopeful that good will come out of the experience.

“We’ve been hammered, no question, but we’re going to make it,” she said. “That’s the most amazing thing. We’ve invested 25 years in this company, and to suddenly be back to our 2010 levels, it’s shocking. But we will be one of the businesses that exits this thing intact as a coffee company.”

As Russell and McDonnell consider what comes next, they are focused on people. Equator has always taken good care of its employees, has always tried to do good in the world. Now it’s time to do more.

“Brooke and I had to step up and answer tough questions from our team about ‘What are you doing as a white woman of privilege to erase institutional bias?’,” Russell said.

One method is actively recruiting women of color to work at Equator. Another is through the recently launched internal mentorship program for entry-level employees, giving them access to the expertise on the team and information about various career paths available to them.

Hearing from diverse voices, such as Susan Goss-Brown, former president of The Gap Foundation, is an important part of the learning strategy as well. Goss-Brown recently spoke at an internal town hall meeting about how Equator can move forward in a way that honors everyone in the company.

“We are also asking the executive team to do the internal work of examining their own bias and privilege,” Russell said. “We started this process by reading and discussing Erasing Institutional Bias by Dr. Tiffany Jana. Part of what this year has taught us, is that these hard discussions and internal work is integral to growing a legacy we can be proud of.”

The company has always offered pay for a volunteer day and time to vote, but historically these perks haven’t been taken advantage of, Russell said. “Now more than ever, we are encouraging our teams to use both of these benefits, they are seeing the value of being an involved community member.”

Russell is optimistic about the upcoming election; she contributed to the Biden/Harris campaign, “because of Kamala. She’s so smart, so charismatic, so warm. She makes us proud.” She wants Equator, a certified B Corporation, to play a significant role in “building back better.”

“We have to use our business for good in the world. People are relying on us to be that shining star, that example,” Russell said. “So far this year has left me filled with gratitude and anguish and defiance and wanting to get to the next step, to come out of this thing having learned so much, with arms wide open as an employer and as a person.” 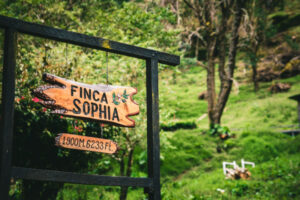 In August 2020, Equator Coffees co-owned farm, Finca Sophia, was named the winner of the prestigious 2020 Panama Cup, presented by the Specialty Coffee Association of Panama (SCAP). At the Best of Panama auction, Finca Sophia’s washed Gesha variety – the first-place finisher in its category – set a new record, selling for $1,300.50 per pound.

“We could not be prouder of our Finca Sophia team,” said Equator CEO Helen Russell. “This is an incredible achievement that not only recognizes the quality of Finca Sophia’s coffee, but it will have a positive ripple on the value of coffee around the world.”

Russell and partner Brooke McDonnell purchased Finca Sophia in 2008, and now co-own the farm in the highlands of Panama with Willem and Catherine Boot of Boot Coffee. At the time of purchase, the farm was unplanted and neglected. Together the co-owners worked to develop the land into a sustainable experimental farm that provides much-needed jobs and economic security in the region. Due to the extreme altitude – the farm sits at an elevation of 2,100 meters – Finca Sophia yields a much smaller harvest than lower elevation farms, but the results are unmatched concentration and expression of flavor.