“IBM has already started that process. We have ingrained the principle within the Global Procurement team that we seek the Best suppliers period. When you seek the Best, this includes all suppliers and excludes none!”

On June 6, 2018, IBM celebrated 50 years of supplier diversity in Research Triangle Park in North Carolina. The event honored five decades of commitment to embracing the diverse supply chain that makes IBM a global leader in information technology, even as the corporation works toward the ultimate goal of no longer needing a dedicated supplier diversity program.

The corporation operates on three core beliefs — respect for the individual, superlative customer service and the pursuit of excellence – and three core values – dedication to every client’s success, innovation that matters and trust and responsibility in all relationships.

These beliefs and values are what drives IBM’s diversity programs forward, what not only justifies but mandates embracing diversity. 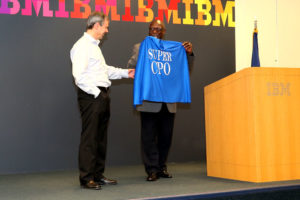 “Once you take our beliefs and values into account, it’s easy to understand that the case for diversity starts with being a competitive advantage,” Robinson says. “We’re in procurement, so to invest funds in supplier diversity means that there has to be a return on those investments or it’s not sustainable.”

Robinson believes you can impact your company’s performance and do good at the same time. “They’re not mutually exclusive,” he says.

Building and maintaining a community of diverse suppliers opens IBM to new ideas, different approaches and creative solutions to customer needs. Across the enterprise, IBMers believe that collaboration helps deliver innovation, quality products and world-class service to the global marketplace in line with the corporation’s core values.

“With diverse suppliers, comes diversity of thought, curiosity of the unknown and challenges the status quo, opening up so many more opportunities,” says Jane Castles, delivery procurement manager. “Diverse suppliers can add value and benefit well beyond just cost savings, for this reason, I see diverse supplier engagement continuing to grow at IBM.”

A history of diversity

For more than a century, IBM has been a progressive leader in inclusion and innovation. The company established an equal pay policy in the 1930s. In 1953, IBM published its first equal opportunity policy, more than a decade before the Civil Rights Act.

The corporation is also a pioneer in the area of LGBT inclusion. IBM added sexual orientation to its nondiscrimination profile in 1984, implemented domestic partner benefits in 1997 and introduced the LGBT constituency into its global supplier diversity program in 1999.

IBM’s reputation for promoting and enacting equality in the workplace caught the attention of the late Senator Robert F. Kennedy in the 1960s who approached IBM’s CEO at that time, Thomas Watson, Jr., to discuss opening a facility in the inner city in order to employ minorities at the height of the Civil Rights movement during a time of high unemployment.

Watson became a board member of Kennedy’s Bedford-Stuyvesant Development and Service Corporation, a combined public/private effort to rehabilitate the area.

Through his participation in this rehabilitation effort, Watson decided that IBM needed to go beyond the government aid programs of the 1960s that had made possible corporate sponsorship of such projects as Job Corps Centers. In April 1968, IBM announced that it would open a manufacturing facility in a leased building at Gates and Nostrand Avenues in the Bedford-Stuyvesant area. At the time, Watson said:

“Establishing a new manufacturing activity is always a milestone for our company. This is all the more meaningful in the case of Bedford-Stuyvesant, where the requirement for new job opportunities is so acute. We will do our best to be responsive to the needs of the area and look forward to being part of the community.”

From workplace inclusion to supplier diversity

In those early days, the challenge was to promote local businesses and finding minority suppliers, he said at the 35th anniversary celebration for IBM’s supplier diversity program in 2003.

“By 1969, it became a more formal program,” Moore said. “Bear in mind that the only minorities at that time were African-Americans and women, and the women [suppliers] almost didn’t exist.”

In the beginning, Robinson acknowledges, IBM’s supplier diversity program was about affirmative action – “You have to put yourself in those times,” he says – but in the 1990s, a shift in thinking put the focus on measuring the real value of minority suppliers.

Since formalizing a supplier diversity program 50 years ago, IBM has put its considerable influence and resources behind a number of diversity initiatives. IBM was the first company, that we know, to develop a global supplier diversity policy, the first IT corporation to become part of the Billion Dollar Roundtable and is a founding corporate member of the NMSDC, WBENC, USBLN, WEConnect and NGLCC.

In addition to receiving the inaugural Apex Award from the Human Rights Campaign and NGLCC, IBM has been recognized for its support of LGBTBEs as World’s Most LGBT-Inclusive Company by the Workplace Pride Foundation, as a Star Performer LGBT-friendly workplace by the Stonewall Global Equity Index, earned the inaugural BEQ Pride Corporate Eminence Award, consistently scored 100% on the HRC Corporate Equality Index and been honored by a broad spectrum of organizations and publications.

“Like all minority engagements, I hope that one day conversations regarding diverse suppliers no longer reference them as a different group to other suppliers, but rather they are included in all conversations, requests for proposals and supplier discussions,” Castles says.

IBM’s supplier diversity success comes from viewing diverse suppliers as a competitive advantage and cultivating them as such. Robinson believes that overlooking large diverse segments of society is a mistake.

“I often get asked, ‘What’s the business case for supplier diversity?’ My question in response is always, ‘What’s the business case for using any supplier?’” Robinson says. “If you’re going to outsource and you’re a technology company, an innovative company like IBM, you’re always seeking the best supplier. If you want to be the best, you have to seek the best. Most of the innovation is being done by small companies. That’s something IBM has known for years and other companies are just coming to realize now. That’s our competitive advantage.”

The supplier diversity program’s legacy is a solid infrastructure that removes obstacles to opportunities through communication and outreach, supporting supplier development through programs like the Tuck Minority Business Executive Program and the WBENC Women’s Accelerator Program and establishing mentoring programs that foster relationships and provide advice and counsel to small and disadvantaged businesses.

But for all the access and support IBM has established and cultivated over the past five decades, corporate supplier diversity programs can only go so far in helping diverse businesses. Robinson has four pieces of advice for diverse suppliers who want to be part of IBM’s supply chain:

“First, know your business. Be able to articulate what value-add it brings to a customer. Does it solve a problem/issue for your customer? Second, who is your customer? Not every corporation is your customer, and you need to be able to discern which ones to target. Third, who is your competition? What differentiates you from them? And fourth, the only constant in life is change. What is your strategy for your business one year, two years, even five years from now? Where is the industry heading and how are you innovating to be ahead of the curve?”

Robinson continues to focus on integrating collaboration with diverse suppliers so intrinsically, to have it be part of procurement’s DNA. “Achieving this is when everyone in the corporation pursues the best overall supplier regardless of who owns the company, and when that pursuit leads to diverse suppliers significantly represented and participating in IBM’s supply chain,” Robinson says.