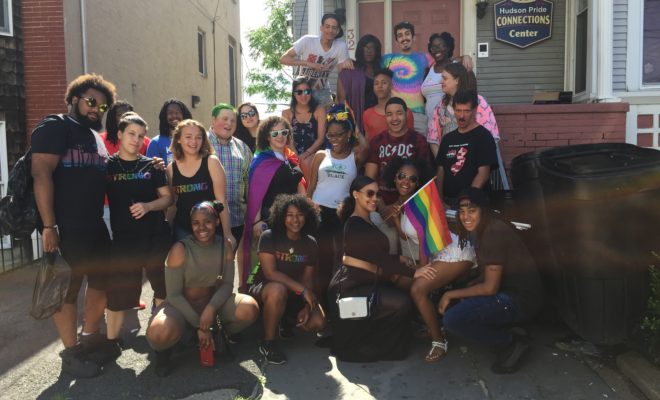 On June 28th, 1969, New York City police descended upon the Stonewall Inn during one of their routine raids of LGBT+ bars. Unbeknownst to them, this was the turning point, because this time, the patrons fought back.

As the police harassed the customers and started roughing and rounding up people for arrest, someone threw the first brick at the cops. Then the riots ensued…for several days.

What followed was the unmistakable visibility of the LGBT movement and the advent of Pride. Now every June is a beautiful commemoration of the LGBTQ community. The month-long festivities bring LGBT notables like Harvey Milk, Eleanor Roosevelt, Tennessee Williams, Michelangelo, Andy Warhol, and of course, Ellen DeGeneres, whose coming out sparked its own sub-movement, to the surface of our collective conversations. It is quite the celebration…or perhaps “selectebration” is a more accurate term. It’s ironic that gay men and transwomen of color played a major role in the Stonewall Riots which of course, birthed the Pride movement; a movement that effectively erases and ignores LGBTQ people of color.

We are all an amalgamation of multiple identities and one, some, all or none of our identities might be advantaged, or disadvantaged. Many of us have a combination of dominant and subordinate identities, such that we hold power in… Click To Tweet

Even within a marginalized population such as the LGBTQ community, members experience differential access to power and influence based on other aspects of their identity. Some groups within the LGBTQ community (i.e. upper class, able-bodied, cisgender, whites, and men) are more privileged compared to their counterparts and are more likely to have their voices heard, and to be able to shape the movement’s agenda according to their needs. However, the needs and voices of LGBTQ persons who are also People of Color, women, bi/pan/asexual, transgender, religious minorities, immigrants, undocumented, low-income, mentally ill, disabled, and/or those who are over 65, are often overlooked by the larger movement. This also means LGBTQ individuals who have membership to one or more of the other minority groups are subjected to additional discrimination, sometimes at the hands of their own LGBTQ family.

“Intersectionality”, a term coined by Kimberlé Crenshaw in 1989, refers to how systems of oppression are compounded for those with multiple minority identities regarding social categorizations such as race, class, gender, sexuality, ability, religion, immigration status, etc. We are all an amalgamation of multiple identities and one, some, all or none of our identities might be advantaged, or disadvantaged. Many of us have a combination of dominant and subordinate identities, such that we hold power in some situations, but not others.

“Intersectionality”, a term coined by Kimberlé Crenshaw in 1989, refers to how systems of oppression are compounded for those with multiple minority identities regarding social categorizations such as race, class, gender, sexuality,… Click To Tweet

Those with multiple minority identities endure multiplicative challenges and resulting needs above and beyond others in the larger common group. For example, if I’m a Black lesbian, I have some disadvantages because I’m a woman, some because I’m Black and some because I’m gay. But there are also disadvantages because I’m all three — a Black, gay, woman — that neither Black men, nor white women, nor gay men, nor straight Black people experience. In fact, as a gay, Black, woman, I might even be ostracized by the gay, Black and women communities due to my membership in one or more of the other groups. Some groups we belong to might not acknowledge, accept, value or include other groups to which we belong. Conversely, we might not be acknowledging, accepting, valuing or including the additional identities others in our group may have. In other words, there’s a good chance we are either the receiving end, or the performing end, of non-intersectional actions.

While we might not be able to do much about being on the receiving end, we can take it upon ourselves to be more intentional about creating intersectional spaces at work and in our community.

Think about your job. You and all your coworkers share an overarching identity as employees of the same company. However, there is more to you than just your affiliation with the company and even your title within the organization. There’s your gender, your race, your religion, your sexual orientation, your family status. Maybe you’re vegan. And gluten-free. Do you work out? Do you have student loans? Perhaps you’re a movie fanatic. Let’s imagine as part of an employee appreciation initiative, your employer is trying to develop a general program to help staff plan for their retirement. How effective do you think the proposed plan will be for you and your colleagues? Even if it will benefit most of the company’s personnel, what about the Millennials who are still in school? Those who are paying off student loans? What about people with children? Or who are caregivers for aging parents? How might special dietary needs affect someone’s finances? What about a transgender employee who is starting the costly process of transitioning?

Even though everyone is under the umbrella of the same organization, people have vastly different needs. Being intersectional means considering those nuances. Perhaps the exclusion was an unintentional oversight. After all, we do tend to be blinded to the existence and impacts of identities other than our own. However, being intersectional means being mindful of and addressing the social, physical, financial and even health-related hardships faced by people with other identities — especially those with multiple minority identities.

In addition to creating safer, supportive and more inclusive environments, taking the time to acknowledge and understand the various identities that exist, even within one person, shows respect for others, and can improve your standing with your consumer base. Being intersectional increases access to various perspectives regarding the potential impact, effectiveness, relevance and reach of company policies, products, services, events and marketing campaigns.

Remember our community is not a monolith. There is so much more to an individual than sexual orientation and/or gender identity. And representation matters. So while we definitely want to pay homage to Harvey Milk, Tennessee Williams and Andy Warhol, notice that in these white men only of the most prominent and favored groups within the LGBTQ community are featured.

Since 2005 Dr. Tyree Oredein (she/her/hers) has delivered LGBTQ+ related professional development trainings to administrators, educators, service providers and corporate personnel. She also works closely with LGBTQ+ youth surrounding topics such as sexuality, sexual health and healthy relationships. She earned her Bachelor’s from Wellesley College, MPH from Hunter College, and Doctorate of Public Health from Rutgers University. She serves on the Board of Directors for Say Ah!, an organization dedicated to increasing health literacy, is an adjunct professor at Montclair State University and sits on the Wellesley Racial Justice Initiative Leadership Collective.

← Previous Story The Struggle. The Uprising. The Promise.
Next Story → Stonewall 50: Love & Resistance at the New York Public Library