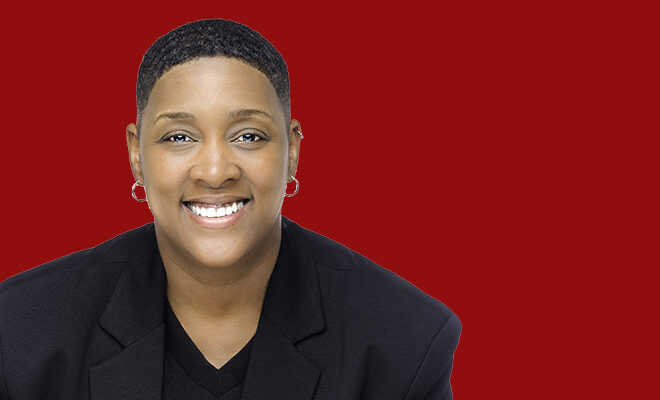 Lolita Morrow doesn’t wait for someone to offer her a seat at the proverbial table.

When it comes to opportunities to grow and challenge herself, “I realized I could build my own d*mn table,” says Morrow Sr. Director at Showtime Networks.

And she didn’t stop with one metaphorical table. She’s built many tables for herself: high-top bar tables (she’s the author of “Think Like a Bartender: Recipes for Life,” voices the audio version of her book and is the host of a podcast by the same name); a big conference table (she has a flourishing career in media and entertainment and is also a licensed real estate agent; the tiny tables that dot comedy clubs (she attended Caroline’s School of Comedy and, in non-pandemic times, performs standup in New York and Los Angeles); big round wedding reception tables (she’s a marriage officiant who’s performed over 40 ceremonies); and a kitchen table (she and her partner, Imani, are raising two adolescent boys, Christopher and Anthony, in Fort Lee, New Jersey). You get the idea.

“I continue to have a great corporate career and have goals for larger roles and responsibilities. I always knew I would have to manage my expectations, in a densely populated field of qualified people,” says Morrow, who was eager to move up corporate ladders faster than rungs opened up. “That’s when I decided if I can’t ‘grow up’ in organizations, I can still ‘grow out’ in terms of my development. So, I made a promise to myself: For any year that I did not receive a promotion internally, I would do something to promote myself externally.”

Recently promoted to her current role , that hasn’t stopped her from building more tables for herself — and inviting others to pull up a chair. A few years ago, she got “hooked on helping stories get distributed and sold,” when she took her first turn as an associate producer on Nathan Hale Williams’ 2019 feature film “Burden.” (The two met at a bar in Harlem.)

Currently, Morrow’s drafting her first treatment for a potential TV or web series and has a couple of other creative projects in the works. Although not able to share details of those right now, she says, “just know that they are passion projects that push the narrative of exploring traditional stories through a different lens.”

“Until there are more people that look like me on screen and behind the camera, I will continue to promote and fight for the underrepresented voice,” Morrow says. “Representation matters, and many boardrooms and executive teams don’t have a broad enough, diverse enough group of people to bring new and innovative ideas. Throughout my 20 year professional life, I strongly believe that if I “looked” like the typical professional with the same educational background the trajectory and pace of my career advancement would have been different. Hell, there wouldn’t be a need for this article to be written. We would be discussing yummy holiday cocktails or if there ever is a wrong time to make or have fondue…and there’s not.”

Intent on making it easier for those behind her on the ladder to reach their potential, Morrow mentors colleagues both inside and outside of her company, is a member of New York Women in Film & Television (NYWIFT) and she recently signed with the Jackson Agency, a Black-owned talent firm, in part, to inspire other LGBTQ and POC professionals.

“It took me a long time to find and embrace my authentic self — living in my light regardless if it makes others uncomfortable or even at the expense of career advancement,” Morrow says. “I am an educated, successful, Black, masculine-presenting lesbian. I am a mom to two sons, one with ASD, a partner and a friend. I am uniquely authentic and that guides me in all of my choices — from whiskey to my career.” 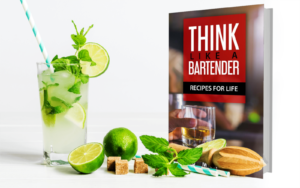 Her whiskey choice, by the way, is Jameson Black Barrel, but lately, she’s been enjoying Uncle Nearest, a whiskey brand based on the recipes of Nathan Green, a once-enslaved Black man who distilled whiskey in Lynchburg, Tennessee. “I can’t drink when I’m upset,” she says. “The beverage to me is a treat. I can’t associate it with feeling down.” She carried that same spirit about spirits into her “Think Like a Bartender” book, a slim volume of life lessons sprinkled with cocktail recipes. Conversational and funny, reading it feels like joining Morrow for an after-work drink.

Morrow manages her many roles by being “a successful multitasker.”

“I’ve always got to-do lists. But I also give myself time. I have a PlayStation hidden in my (home) office. My boys don’t even know about it. I’ll take a break and play ‘Madden’ or a role-playing game. We all need that recharge, so we don’t feel spent.”

For her birthday this year, Morrow asked her partner for a night to herself in a nice hotel. “I took my video games, my favorite book and ordered room service. Just that one night filled me up. Every person in your life deserves the best you, but you have to keep yourself fulfilled to be your best self.”

For years, Morrow kept quiet at work about her outside projects, trying to keep those parts of her life separate even while she carried lessons learned from them into the office: “Standup will teach you pacing. As a new comic, you’ve got five, maybe seven minutes to get the job done and you’re watching for that red light for time. You learn how to pivot if a joke doesn’t work well, or how to stretch and build on it when it does,” she says. “Things like being comfortable in a pregnant pause definitely helps in business meetings.”

But her profile both outside and inside her organization has risen in recent years and now, she says, “Many of my close colleagues tease me about having too many jobs. I don’t mind being known as the author and the standup comedian but it’s very important that I’m also known for the work I produce in the office.”

Morrow grew up in Houston, an only child raised by her grandparents. Her parents separated when they were in their 20s and her mother passed away when Morrow was just 9. Although she describes herself as growing up in a protective cocoon, her habit of challenging herself started early. She learned to fly private planes in high school as a student at Sterling Aviation and planned to study aeronautical engineering but charted a new course while an undergraduate at Texas A&M University. She later earned a Master of Arts in Strategic Communication and Leadership from Seton Hall University and an MBA from the Jones School of Business at Texas Southern University. She’s also a graduate of leading industry programs, such as the Cable Executive Management Program at Harvard Business School and the Digital Marketing program at Cornell University. Before joining Showtime in 2007, Morrow worked in various sales and marketing roles for consumer goods companies, including Phillip Morris, PepsiCo and MillerCoors.

What’s next for Lolita Morrow, builder of metaphorical tables?

When the comedy clubs can reopen, she expects to return to the standup stage and she’s got her sights set on a bigger stage, too: She wants to shepherd a project all the way to the Golden Globes.

“I’m always thinking of the next thing, and I like to pick a goal that’s challenging,” she says. “I’ve told myself I’m going to be at the Golden Globes one day. Covid gave me a bit of time to get there, but I’ll get there.”