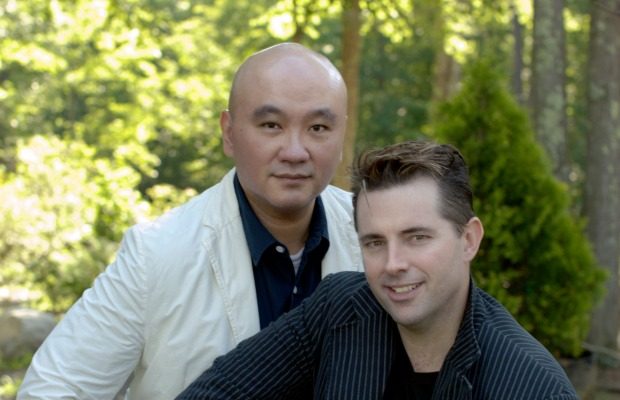 A few years ago, Cimon Butler was watching videos of the tsunami that devastated Japan. People were perched atop their houses, desperately trying to flag down the helicopters searching for survivors in the swirling waters. As he watched, Cimon noticed that inevitably the people waiting to be rescued clutched two things – a dog and a cell phone.

“It was at that moment that I thought, ‘this is ridiculous,’” Cimon said. “We know that the infrastructure has just been destroyed. It’s ridiculous that the person in the helicopter has a phone, but they can’t communicate with the person needing help. That’s when inspiration struck — there must be a way to talk to each other without a signal.”

This inspiration led Cimon and his husband and business partner, Jack Chen, to create Loud-Hailer. Their proprietary solution gives users mobile augmented connectivity by creating BLE mesh networks using mobile apps and repeaters. Using Bluetooth Low Energy (BLE) means that smartphones, tablets and devices running Loud-Hailer will only “sip” power and that the repeaters can even run on battery or solar.

As Easy as Talking and Listening

The term “loud hailer” comes from the Australian equivalent of “megaphone,” a simple in-person communication tool that allows an individual to broadcast a message to a group in close proximity without having to know the credentials or contact details of everyone in hearing distance. There is no internet equivalent that doesn’t require knowing everyone’s details and having wi-fi or cell coverage.

For voice communication, there is a choice of technologies depending on the distance the communication has to travel. For example, people sitting next to each other in a conference room would just talk to each other; they wouldn’t call each other on the phone. Yet, Jack points out, that’s what happens digitally because “digital communication has been a one-size-fits-all approach: the Internet.” Consequently stadiums are spending tens of millions on installing wi-fi and some of the tech giants are spending much more looking at providing internet to remote locations.

Loud-Hailer takes an alternative approach. Its solutions provide a range of tools, depending on the distance that the digital communication has to travel, to provide augmented connectivity, without the heavy capital expenditure that Internet based solutions require. Loud-Hailer’s solutions do not seek to replace, but rather compliment the Internet and extend its reach to areas with poor connectivity, hence their mission statement “Bridging the gaps in today’s communication infrastructure.”

With Loud-Hailer, instead of using an internet service provider or cell carrier, a network is created by connecting people to each other. So if you’re on that subway train with no signal, Loud-Hailer creates a network by connecting your smartphones via the app and allows you to send that message.

“As we rely more and more on our smartphones and other devices, constant, reliable connectivity is becoming increasingly critical to how we work, play, live and communicate,” Jack said. “And you don’t have to be halfway around the world and in the middle of a catastrophe to be suffering connectivity problems. Where we live, two hours north of New York City, we have a lot of connectivity problems as well. Loud-hailer works when your signal doesn’t.”

“Without wi-fi or internet, suddenly you have a very fancy, very expensive brick in your hand,” Cimon explained. “With Loud-Hailer, a simple app download allows your smartphone or device to connect to others on the network and communicate securely. Now that very expensive brick is transformed magically back into a technology for communication again, just like a megaphone broadcasting messages.”

The uses for Loud-Hailer reach far beyond simple messaging, Cimon said, with new ideas for practical applications for this technology constantly rising out of discussions with users and clients.

“Our technology at its core is very simple to use, and with just a few modifications, you can make it do so many different things,” he said. “That’s what’s so exciting. When you think about its simplicity and its goal to fill the gap when other means of digital communication fail or are unavailable, it is quite easy for anyone to imagine how they could use Loud-Hailer.”

“And because we’re thinking outside of the traditional internet based network structure, we’re also able to do a lot of cool things better and less expensively than traditional carrier-based networks,” Jack continued.

Some of the cool features that Loud-Hailer is developing for customers include:

Roll Call tells you all the users who are at the facility right now. So the cruise ship can check that all the passengers are on board. That all workers on the oil field are accounted for. That students are in class.

Next gen public safety features let users send panic alerts so that first responders who may be miles away can know who sent the alert, the nature of the emergency, and the building, floor and room where they are ­— on a college campus, oil rig, construction site, or even in the middle of a state park.

Location based notifications allow you to instruct people on one floor to evacuate and another floor to stay put, even if there’s a fire in the building and the power is off.

Graffiti lets you leave digital messages that can only be read by someone else who has the app. So you can commemorate a personal event at a nature preserve without damaging the environment. Or note where you met your spouse on campus in your sophomore year. Or imagine being able to read a restaurant’s reviews just by standing in front of it and aiming your phone without relying on a signal or even having to search for the restaurant.

It was while researching the types of industries and businesses that typically have connectivity problems that Jack and Cimon learned of the National Gay & Lesbian Chamber of Commerce and the idea of supplier diversity. Large sports stadiums were at the top of the list for congested signals, something the Loud-Hailer team had experienced firsthand, and it was in that research that something caught Jack’s eye.

“When I was researching, I saw that Major League Baseball had just signed on to be a corporate sponsor of the National Gay and Lesbian Chamber of Commerce,” Jack said. “That’s when I started learning more about the world of diversity procurement.”

MLB leadership was thrilled to learn that their “announcement had an impact” when BEQ Pride publisher Robin Dillard notified them about Loud-Hailer’s research. “Major brands and supporters of the NGLCC should know the LGBTQ business community is watching and taking notice and following their lead,” she said. “When major brands stand up for equality, these small business owners find the courage to bring their full-selves to the marketplace and we’re all stronger for that.”

Loud-Hailer received its NGLCC certification in June 2016, and they are already seeing the benefits: they won a spot in the 6th annual NGLCC LGBT Biz Pitch Competition at the international conference. During this fast-paced competition, Loud-Hailer will be one of four LGBTBEs giving their best 10-minute presentation for a chance to win over $30,000 in cash and prizes, including a $20,000 branding package from NGLCC Certified LGBTBE creative agency CMYK.

Being part of that competition is a huge opportunity to get Loud-Hailer in front of a lot of potential customers at once, but they are also looking forward to making personal connections through NGLCC introductions.

“So many of the corporate sponsors of the NGLCC have made such a dedicated effort in spending their resources toward diversity procurement,” Jack said. “Through the NGLCC, we have a way to reach out to those folks and talk to people who might be interested in learning about Loud-Hailer. Instead of being lost in paperwork, the NGLCC helps us connect with the right people to help us move forward.”

To stimulate the growth of the company, Jack and Cimon knew they needed an experienced, connected guide and mentor. When Jack met business equality advocate Robin Dillard, founder of Business Equality Network and publisher of BEQ Pride, at the NGLCCNY’s new member orientation in May 2016, he immediately asked Robin about helping Loud-Hailer refine their pitch and introducing them to potential partners.

“Getting certified is just one of the tools we needed to collect in order to succeed,” Jack said. He also took to heart the advice from Jonathan Lovitz, NGLCCNY’s Executive Director, to think of your NGLCC membership and certification like a gym membership: you only get out of it what you put in it. As Jack noted, “Another part of the process that has been tremendously helpful has been working with folks like Robin, who has been an incredible resource. She’s almost like an accelerator. She knows everyone and she introduces us to folks she thinks may be interested in our product. She’s been phenomenal.”

Both Cimon and Jack agreed that partnering with an advocate was one of the best decisions they have made to position Loud-Hailer for success. “Thanks to Robin, we are in discussions with more than a dozen household name companies and government entities about how Loud-Hailer’s technology can transform their business. Getting Robin’s stamp of approval, through her personal introductions, cuts months off our of business development cycle,” Cimon noted.

“If you’re fortunate enough to come across an advocate who can really guide you and lead you and connect you, that is beyond gold. It’s just huge for any start-up.”

“As other LGBTBEs are going through this process, I think they should seriously consider working with supporters, mentors and advocates like Robin,” Jack said. “That’s all part of the path to success.”