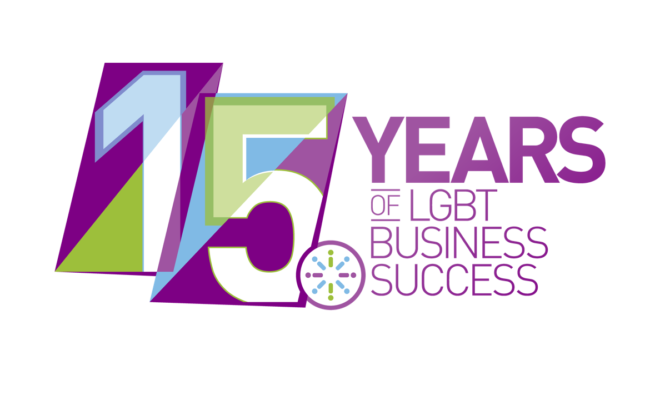 The National Gay & Lesbian Chamber of Commerce started in November 2002, when Justin Nelson and Chance Mitchell realized no one had really considered the economic equality of LGBT people or the impact economics could have on the equality movement. The two co-founders sought to showcase that LGBT people were business owners, employers, taxpayers, providers of healthcare—that they were a vibrant, essential part of the small business engine that makes the U.S. economy run and therefore, deserved a place at the equality table.

Fifteen years later, the NGLCC is at the forefront of advancing LGBT economic success and showcasing the diversity of talent in the lesbian, gay, bisexual, and transgender community.

From its first corporate partners —founding members IBM, Wells Fargo, JPMorgan Chase, Motorola, Travelport, Intel, Wyndham Worldwide, American Airlines, American Express, EY, Aetna—the NGLCC has cultivated a powerful relationship with nearly 200 corporate and government partners. As awareness of the importance and value of including LGBTBEs in the supply chain grows, the NGLCC continues to advocate for inclusion and visibility through its Supplier Diversity Initiative.

In 2016, the HRC announced that criteria for inclusion in the Corporate Equality Index changed to make LGBT Supplier Diversity a stand-alone scored criteria, reflecting the growing importance of LGBT suppliers.

“At NGLCC, we now have nearly 200 corporate and government partners that understand not only the value of the LGBT dollar, but the economic imperative of inclusivity and LGBT visibility in their supply chains and marketplace,” said NGLCC Co-Founder & CEO Chance Mitchell. “We’re poised and ready to welcome hundreds of new partners, especially those who are seeking parity in supplier diversity under the recent changes to the HRC Corporate Equality Index.”

In January 2017, the NGLCC released the first ever snapshot demonstrating the economic and social impact of America’s leading LGBT business owners and entrepreneurs.

The new report explores the types and sizes of LGBT-owned businesses currently certified by the NGLCC, the number of jobs they create, their geography and the personal narratives of successful LGBT business owners who reflect the very best about America’s innovative and entrepreneurial spirit.

It’s a revealing look at the economic power of the LGBT business community. In 2015, certified LGBTBEs contributed $1.15 billion to the US economy. If all 1.4 million LGBT-owned businesses in America are considered, that number grows to nearly $2 trillion.

“As we have always said, economic visibility, just like social visibility, is essential in building a diverse and inclusive society—and the next 15 years of NGLCC will be all about maximizing that  visibility and new opportunities  for our ever-increasing number of LGBTBEs and the corporations who support them,” Mitchell said.

Recognizing the hard work and commitment required to grow the LGBT business community and achieve a seat at the equality table, the NGLCC honors individuals and companies at two prestigious events each year.

The NGLCC National Dinner reflects on the year after year growth in the LGBT business community because of the opportunities, partnerships and advocacy victories championed by the NGLCC and its partners. Awards include Advocate of the Year, Supplier of the Year and Corporation of the Year.

Recognizing that the LGBT community represents members of many other diverse categories, the NGLCC launched the National Business Inclusion Consortium in 2011 to honor the community’s intersectionality and solidarity with other diverse communities.

Taking to the Global Stage

In 2013, NGLCC stepped onto the global stage with NGLCC Global and its Summit of the Americas. Now in its fifth year, the business development conference has taken place in Bogotá, Colombia (2012); Mexico City, Mexico (2014); Lima, Peru (2015); Santo Domingo, Dominican Republic (2016); and Toronto, Ontario, Canada (2017). This event brings together leaders and experts from government, corporations, entrepreneurship, academia and global economic development.

Through educational programming and networking, the Summit strengthens the ecosystem that supports the advancement of economic and social development of LGBT entrepreneurs and the LGBT community at large, in Canada, the Americas and worldwide.

“Every day we are adding new suppliers, new corporate partners, new team members, new tools for sharing information and  contracting  opportunities, and always exploring new partnerships with all  diverse  communities—because when we all do better, we  all  do better,” said NGLCC Co-Founder and President Justin. “We won’t rest until every LGBT business owner in the United States, and in the increasing number of countries we work with around the world, has unfettered access to every  possible opportunity.”

As Mitchell and Nelson look ahead to the next 15 years, they see opportunities to advocate for the LGBT business community at home and around the world. Developing the next generation of LGBT business owners and promoting economic success are at the forefront of NGLCC’s mission for the future.

“NGLCC and our partners have never been more committed to  ensuring opportunity and success for our community– one business and one  connection at  a time. The indomitable and entrepreneurial spirit of our LGBT  family is what has made NGLCC the global leader in LGBT business opportunity  over the  last 15 years, and it is what will propel us into the next 15 years  ahead,” Nelson said.