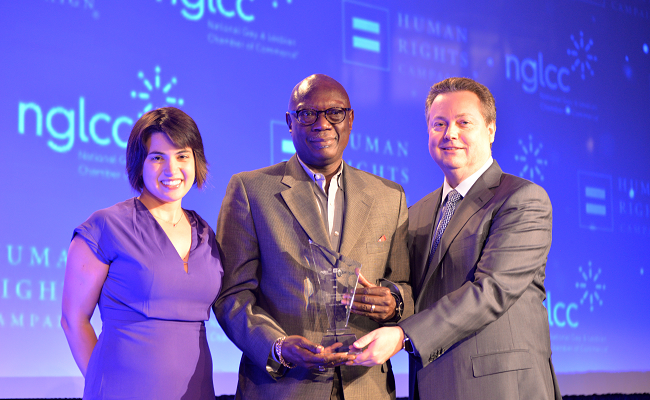 Furthering its mission to expand economic opportunities and advancements for LGBT people, the NGLCC announced the latest Memorandum of Understanding with a federal agency to promote the inclusion of NGLCC Certified LGBT Business Enterprises in government procurement and supply chains. The U.S. Department of Agriculture, under the leadership of Secretary Tom Vilsack, will work closely with the NGLCC to provide opportunities to certified LGBT-owned businesses looking to secure vendor contracts with the Department and its agencies throughout the country. In 2015, USDA’s 11 main buying agencies constituted over $5.4 billion in USDA contracts, of which approximately 50 percent went to small and disadvantaged businesses.

The keynote speaker for this year’s conference was Grammy Award winner Melissa Etheridge. Etheridge provided background about her recent song, “Pulse”, and also discussed politics, music and the importance of coming out.

Also speaking at the conference were three of America’s leading LGBT innovators in tech, research, and advertising: Aaron Walton, founder of Walton Isaacson; mobile technology and media entrepreneur Heidi E. Lehmann; and pioneering communications expert Bob Witeck. The speakers led discussions about the importance of connecting your identity and experience to your business.

The NGLCC recognized the Atlanta Gay & Lesbian Chamber of Commerce as a role model for other chambers and an example of what an LGBT chamber should be. A winning Chamber of the Year is judged as an established and stable chamber that has weathered ups and downs, continued to see sustainable growth, remained relevant in the community, and is engaged locally and nationally in policy, LGBT business enterprise certification, and the business equality movement.

The Rising Star Award honors a chamber that has exhibited a steep trajectory of growth, new vitality and relevance in their local LGBT business community and a demonstrated commitment to being part of the broader national movement. This year, NGLCC honored the Nashville LGBT Chamber of Commerce.

A major highlight of the three-day conference was the presentation of the inaugural Apex Award, co-sponsored by the Human Rights Campaign Foundation and the NGLCC, to IBM.

As NLGCC’s Founding Corporate Partner, IBM’s track record in embracing diversity dates back to combating segregation in the Jim Crow South, and is a shining example of the power of corporate social responsibility.

IBM created its supplier diversity program in 1968, before the existence of the U.S. Department of Commerce’s Minority Business Development Agency (MBDA). The program’s goal is to provide opportunities to diverse suppliers who can add value in every region where IBM operates. Qualified suppliers are at least 51 percent owned by LGBTQ individuals, people from an ethnic minority (as defined in each country or region), or by women, military veterans, or people with disabilities.

The 2017 National Conference will be held in Las Vegas.