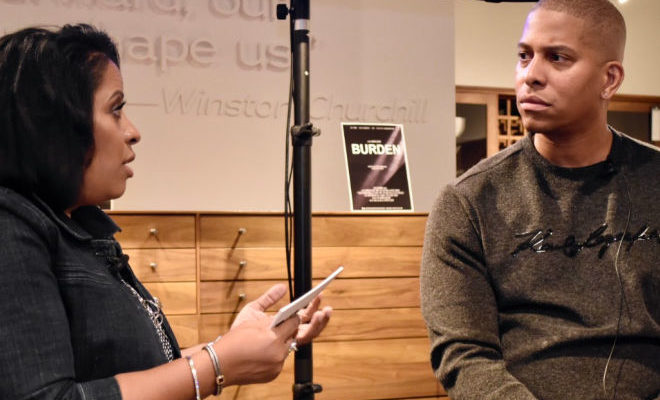 On Location with Nathan Hale Williams and Burden the Film

I recently had the pleasure of moderating a discussion and Q&A for the New York City screening of Burden by writer, director, producer Nathan Hale Williams (90 DAYS, Love for Passion, Dirty Laundry). This short film tells the story of Bennett Lewis (Nic Few), a successful and highly educated family man who, in spite of his many accomplishments, still has to deal with the perils of being a Black man in America. This special screening was part of a Black History Month celebration hosted by Minnesota based Room & Board Home Furnishings in Chelsea. 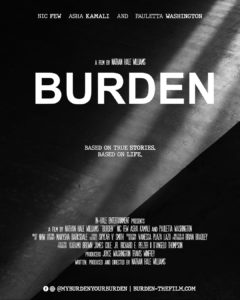 Burden takes us through 12 hours of Bennett Lewis’s day where he confronts various macro and microaggressions from almost everyone he encounters. But for his loving wife and son from his morning workout at the gym, to a team meeting in the office, to an all too familiar exchange with a sales clerk at a jewelry store, his journey is filled with a culmination of experiences revealing his true burden. Is it a state of mind or a state of being? Ultimately, that decision belongs to Bennett Lewis.

This film allows an audience to bear witness to a typical day in the life of many Black men, providing context and insight into his ‘burden’ while simultaneously revealing our own. But Williams’ genius lies beyond his masterful storytelling; his true craft is in his ability to use an oft-told tale of microaggression, bias and discrimination to spark an important dialogue where it can have the greatest impact — the workplace.

Williams’ larger purpose allowed for an amazing business opportunity for iN-Hale Entertainment, LLC, founded by Williams in 2004. Long before his career as a corporate attorney, Williams had his sights set on becoming a filmmaker and working in the entertainment industry. As a young boy, he was inspired and compelled by the likes of filmmaker Spike Lee and others to tell stories that would resonate and authentically capture the issues and concerns of his community.

Williams’ Burden screenings have been a big hit among Diversity & Inclusion, Human Resources and employee affinity groups in companies across the country, including the event at Room and Board. Mark Binke, a leadership associate from Room and Board, said the screening “aligned with the core values of our corporate culture.”

Williams’ mantra, “activism and advocacy through storytelling”, is a big bet on using film and authentic voices to evoke understanding. He talks a great deal about how we assume others understand our journey — they often don’t. Creating short films that provoke conversations around difficult topics is one way to invite dialogue and cultivate empathy.

After the screening, I sat down with Williams on the second floor of the beautiful showroom of Room and Board with a hundred or so film enthusiasts, avid movie screeners, as well as marketing and D&I executives from major brands for this important conversation.

Companies like Novartis, Showtime, Akin Gump, Strauss Hauer & Feld, LLP and Cushman & Wakefield have already had Williams share this unique opportunity for a safe space and dialogue around bias and belonging with their employees. Williams is looking for more opportunities to encourage a deeper understanding of the economic and business impact of not addressing bias and discrimination in the workplace.

Williams says he created the film in response to a series of events where Black people, and specifically Black men, were experiencing micro and macroaggression, discrimination and in some cases violence “while being Black”. He described his frustration when he heard about the two men casually waiting for an acquaintance at a Starbucks in Philadelphia in April 2018, who were arrested when the store manager called the police demanding they leave the premises for no reason. He decided to channel his anger into activism.

Williams is committed to “leaving this place a better place.” From the audience, a friend exclaimed “he’s a good time” to which Williams responded, “if you’re going to be a good time, be a good time.” And, that’s what happened, we had a good time.

← Previous Story Meet the 40 LGBTQ Leaders Under 40 Class of 2020
Next Story → Women’s History Month: A Legacy of Innovation