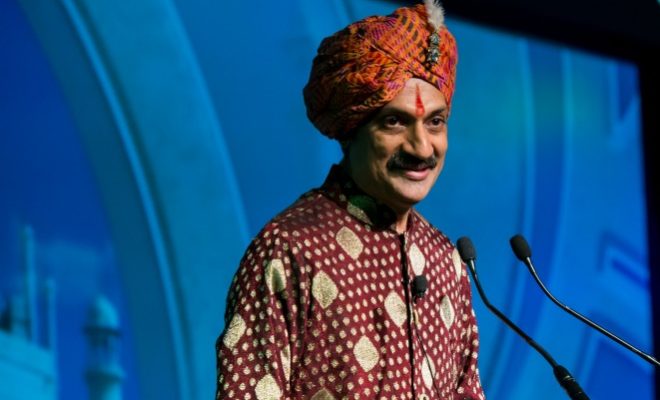 Prince Manvendra Singh Gohil is the first openly gay prince in India, where same-sex relationships are still illegal. The Prince is an outspoken advocate for the community and follows his words with actions; in 2001 he founded The Lakshya Trust to focus on gay issues and sexual health in his region. He made headlines again last year when he announced that he is constructing a center for LGBT Indians on his ancestral palace grounds to provide guest quarters, a medical facility and space for vocational training.

Prince Manvendra explained that while it was never a crime to be gay, it is the sexual act—even between heterosexuals except for procreation—that is illegal, but the law perpetuates the bigotry against homosexuality rampant in Indian society. The law was reversed in 2009, but the Supreme Court reversed the law yet again in December 2013, once again outlawing intercourse for anything other than procreation. He noted that there was a relief during that brief period during which many parents were coming around to accepting their children as gay or lesbian.

“The reason why we are fighting this law is it is a direct violation of the rights granted to us by the Indian constitution,” Prince Manvendra said. “As an Indian citizen I feel if you are getting rid of colonization, one should have independent laws; it makes no sense. We are depending on British laws.”

To make a difference for his LGBT community, Prince Manvendra made it his mission to create the Center for those in need. But to make it a reality, he would need help. The Prince formed a partnership with another royal family from India—the Kapurthala family, settled in the United Kingdom— whose ancestors were close to his own.

“Prince Amar is a very good friend of mine, he’s a straight person but very supportive of the LGBT cause,” he said. “Since 2010, he has been actively advocating my cause, LGBT rights, and when the idea of the Center came up, he lent me support. So I decided I will name the Center after him.”

The friendship between Prince Kanwar Amarjit Singh (or Prince Amar) of the Kapurthala Family and Prince Manvendra dates back to 2009, when homosexuality was first legalised—something they both fought for, risking their lives and royal heritage for their belief in equal rights. Their ancestors also served together in the Indian Parliament, within the prestigious Chamber of Princes.

“I am touched that Prince Manvendra named the center after me. Together we will take the good fight to India, and win,” said Prince Amar in a statement.

The Center is situated in the royal establishment of Hanumanteshwar, set up by Prince Manvendra’s great-grandfather in 1927. “Amar is the Indian word for immortal,” he explained. “I see the Center as a legacy that needs to carry on after I’m gone. Amar makes sense.”

The idea for the Center, officially named Hanumanteshwar Amar 1927, came about from the Prince’s own life story, in which he was publicly disowned and disinherited from his ancestral property.

“I thought if this could happen to my life, it could happen to anyone’s life in India if you are gay and want to come out,” he said. “Most of our parents don’t accept us, and even if they do there is bigotry in the society which doesn’t allow them to accept us for the who we are.”

He explained that Indians who come out are often thrown out of families, boycotted, shamed in public and humiliated. It is worse for those who are not financially independent, and the repercussions can be severe.

“It’s very important to have somewhere to provide a combination of social and financial empowerment,” Prince Manvendra said. “The Center is a place where people can be safe, accepted, taken care of, including a medical facility to address all their health issues, including sexual health. We are also providing a shelter home where if anyone is rendered homeless and has no place to go, they can have social support and housing until such time he or she is ready to get out on their own.”

The Prince has donated considerable property from his trust for the Center, where certain structures are already built and some are under construction. His most significant challenge today is raising the funds required to construct new buildings and renovate others.

The Power of Education

One of the most critical services the Hanumanteshwar Amar 1927 Center aims to provide is the learning center, to teach skills such as Information Technology and English. “IT has become more of a necessity than anything else these days,” Prince Manvendra said. “People from lower economic backgrounds may not have these skills. Speaking English also gives you confidence, so you can talk to more people and can go out of India.”

The goal of the learning center is to help the LGBT community build the capacity for earning their livelihood, as there is a lot of discrimination going on in workplaces. The Prince explained that many are seen as criminals, even in the workplace. “If most LGBT people are already naturally talented with skills, we need to train them to use their talents to commercialize themselves professionally,” he said.

The Prince is confident that once a person realizes some success, parents will begin to see their value. Disowned in 2006, his family accepted him back in 2007, after he appeared on Oprah’s talk show in the United States. Suddenly, royal families that had shunned him wanted selfies with Prince Manvendra, as no person from the Royal Family of India had previously met Oprah face to face.

“Look, if you want to get accepted, it’s a temporary phase,” he advised. “Parents emotionally blackmail their children. I tell people who come to me and say, ‘My mother will kill herself if I don’t marry a girl.’ I tell them that the mother is just doing drama and is trying to test you. These parents will take you back when you become something.”

LGBT people “becoming something” is the #1 priority for the Center, which can have a tremendous economic impact on not only the individual but the region, the country and the world. Looking beyond the community, Prince Manvendra is working with NGLCC: The National LGBT Chamber of Commerce in the United States to discover how India can create LGBT friendly policies in the corporate world. NGLCC is keen to come to India to help create employment opportunities for the community, providing incentives to companies.

Above all, the Prince believes that the success of the Center will hinge on the ability to create awareness by sensitizing the media, religion and society. Once these spheres change their position toward the LGBT community, he is confident the economy can flourish.

But the transformation must begin with the younger generation. In fact, the Prince has many student groups, well-versed in his mission, approaching him and getting involved. “I’m doing a TED talk every month, and I even have to turn some down,” he said. “If you can educate students, they are the future of the country. They can become anything they want, and if we can sensitize them, give them real-life examples, they can pass it on and the future is positive. It can create a snowball effect for the local economy and in turn the world.”

Also, much like PFLAG in the U.S., the center will be furthering India’s Straight-Gay alliance, inviting parents who have accepted their children to speak with other parents.

The Hanumanteshwar Amar 1927 Center should have some facilities up and running within the next year or two, and Prince Manvendra is encouraging other people to be inspired to open more centers like his. “One center for the population of India will not be enough,” he said. “These centers will be very much in demand.”

To donate to the Hanumanteshwar Amar 1927 Center, visit the Prince’s website at www.lakshyatrust.com.