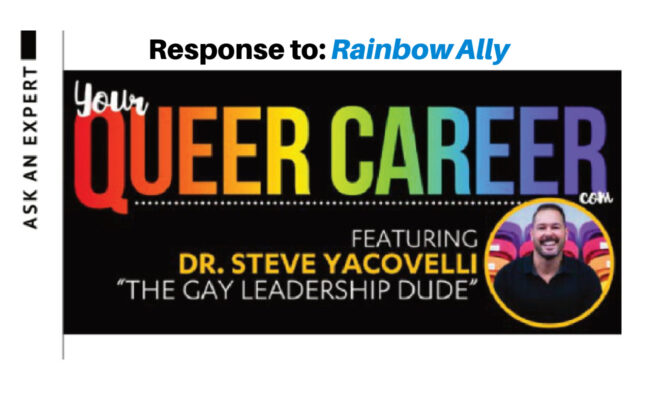 Happy Pride Month, “Gay Leadership Dude®”! I’m not a member of the LBGTQIA community, but I try to be a good ally. While I’m kind of floundering on how best to support my gay friends and coworkers, do you have any advice on how to be a better ally for my queer friends?

RAINBOW! First off, thanks for wanting to focus energy on improving your allyship … that in and of itself is a great step. All “others”—especially our LGBTQ+ Community—need awesome allies who can be there when we need them. Bravo!

But whether you’re going to be an ally to the queer community, to our siblings of color, our female colleagues, neurodiverse co-workers, or frankly any underrepresented, disenfranchised community, here are five common strategies you can leverage to be more effective, and take some of the burden of being an ally off the group you are striving to help:

As someone who strives to be an awesome ally: DON’T DO THAT.

It can be exhausting (at best) or triggering (at worst) for us “others” to be in the space of educator. Respectfully, take the time to Google/Bing/Yahoo! that sh*t! It’s too easy to find some of the trends and history that’s made marginalized people struggle against the ocean current of “otherness.” What was “Stonewall” and why is it important to the LGBTQ+ Movement? Why does Pride exist (and need to)? Why are getting someone’s pronouns so important, especially to our trans brothers/sisters/siblings?

Also, research what other allies are doing before you dive in to do your work. Check out the many podcasts, books, TV shows, and movies that can give you wonderful glimpses into the broader queer experience. Seek them out and absorb them.

When we say “listen” we mean “active listening.” Basically, active listening is when the Receiver of the message (that’s you, Rainbow!) sends back signals to the Sender (that’s the LGBTQ+ or “other” you want to be an awesome ally for) to let them know “I’m here and I’m listening.” Three simple tactics to do this:

(2) Use paraphrasing statements back to the Sender such as, “If I’m hearing you correctly …” or “Listening to you, it seems as if …” to ensure you’re hearing the message as intended; and

(3) Use open-ended questions. Open-ended questions (OEQ’s) help start a dialogue versus that one-sided conversation. Similar to paraphrasing, these are more universal questions you can ask such as, “What do you mean by …?” and “What could some of the differences be … ?”

If your LGBTQ+ friends decide to engage with you on the subject of inequity, listen to them and offer support where appropriate. As an ally, your job is to listen and learn.

In short: it’s insincere if you’re being an ally to make yourself look like a better person. Be mindful of the reasons WHY you want to be an awesome ally, Rainbow. Why did you post what you did on social? Why did you join the LGBTQ+ ERG? Is your intention to truly help your queer co-workers, or for other reasons?

In addition, actively work to amplify and share “other” voices in your spheres of influence. Give the mic in any way you can (for example: re-posting a point a social post from a queer person) and don’t center yourself in the conversation. It’s okay to feel bad about your role in an unjust society, but as an ally, it’s necessary to realize that your role is one of support.

When you’re in an uncomfortable place you may make mistakes. And you know what, Rainbow? AWESOME! Acknowledge when you were wrong, learn from the error, and move on. Failure is an amazing teacher; be sure you’re listening to their teachings.

BONUS: Show Up and Know Where to Stand … Intent is awesome, Rainbow, but it’s the action that matters. Point out those microaggressions/microinequities when they occur and be prepared to support your LGBTQ+ friends where they need it. Awesome allies also know where to “stand” to support queer folks and other “others.” Sometimes the situation needs the ally to be in front of the LGBTQ+ person; while other times “behind in silence” support or “next to in equal defiance” are the way to go. Don’t assume as an ally you need to be the “Rainbow Savior” and always defend; but ask your queer friends what help they need and stand in that spot: in front of, next to, or behind.

Thanks for being an awesome ally, Rainbow … now go out and practice these strategies and share them with others to strengthen our army of awesome allies.

HAVE A QUESTION FOR “THE GAY LEADERSHIP DUDE”? Submit @ www.YourQueerCareer.com Please note the advice shared is for informational use only; it is not intended to replace or substitute any mental, financial, medical, legal, or other professional advice. Full disclosure can be found at the website listed above.

← Previous Story Q: Balancing My “Authentic Self” with My “Professional Self”