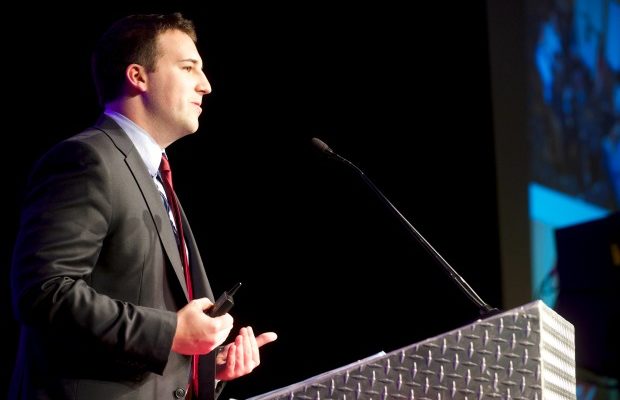 Reaching Out MBA (ROMBA) is an organization which focuses on LGBTQ MBA students and professionals.  Now in its twentieth year as an organization, they are celebrating the milestone with the annual ROMBA Conference taking place in Boston from October 12-14.  Both the conference and organization have come a long way since the first conference was held 20 years ago.

ROMBA was originally founded as a conference for LGBTQ MBA students at Harvard and Yale Universities. What was once a gathering of about 80 people is now a major event with about 1,500 people expected to attend the conference. Matt Kidd, ROMBA’s executive director, said the organization today is remarkably different than when it was founded. “We are now a non-profit, with programming year round and a full-time staff,” he said.

Kidd, who came to the role five years ago and has served on the board since 2009, said the reason those students founded the organization was they felt like they were underserved. “They’d look around and see that other diverse students had programs and organizations that motivated them and connected them, and wanted something similar.”
According to Kidd, ROMBA’s mission is to educate, inspire and connect LGBTQ students and professionals to become the out leaders of tomorrow. And ultimately, they are trying to best position students and alumni to have the skills and the network to succeed.

To develop the business leaders and entrepreneurs of the future, ROMBA puts a lot of emphasis on the annual conference. Kidd said they are working with about 90 companies who are recruiting, and they do everything possible to put students in front of the right companies to make the right connections. “There’s a big education component, especially as they are starting their schooling,” he said. “We set up a series of programming for the admitting students, so when they start their program on day one, they are better positioned than their peers.”

Another development initiative launched three years ago is a scholarship and leadership program in partnership with 40 business schools. Kidd says the program is giving out approximately $2.5 million per year and is partially responsible for growing the number of LGBTQ students in business schools by almost 100 percent over a three-year period. He notes that the percentage of LGBTQ students went from 2.7 to over 5 percent recently, and is excited to see the program grow and succeed along with the students.

Preparing to Be Out in the Workplace

For any out student, venturing into the business world is not without its challenges. “There’s a stigma that still exists, and a lot of people will go into the workforce and become closeted again,” Kidd said. “I think it’s getting better; companies are making it very clear that diversity is  something valued.”

ROMBA makes sure its members are aware that while they may go to a company whose CEO is hugely supportive of the LGBTQ community, the reality is that you are not working for that CEO. “You are probably working for a middle manager, and the company’s values may not always trickle down. It varies by industry and company, but you can have a company that embraces the LGBTQ community but may still have that one bad apple that could be a roadblock to someone’s career.”

Additionally, outside of Fortune 500 companies, it’s important to understand that you can still be fired in some states just for being out.

Being out and authentic to yourself is incredibly important to succeeding in business. Kidd, who is big on data, cites several important studies that say if you’re not out in the workplace, then you are not performing to your fullest and won’t be particularly satisfied with your job. In turn, this impacts both the bottom line for companies and also the trajectory of your career.

“The reality, and I always remind students of this, is you are going to spend more time with co-workers than you are with your loved ones. The majority of time spent hiding who you are isn’t helpful in the long run. We get asked all the time by students, ‘What does it matter if I’m LGBTQ and why does anyone have to know?’ They don’t have to know, but the better question is does it make you feel more comfortable with yourself. If you’re not having those conversations, it can affect your ability to network. It’s cyclical,” he said.

For this year’s conference, ROMBA is holding nothing back. Featured speakers include CNN’s Anderson Cooper, United Therapeutics CEO Martine Rothblatt (the highest paid female CEO in America), and Dom Barton, global managing partner of McKinsey (the first company to sponsor the conference). The conference will also feature several panels that will include C-suite executives from ADP and Land O’ Lakes, as well as other yet to be named speakers.

No less than 58 breakout sessions are planned, with topics ranging from investment banking to preventing unconscious bias as an LGBTQ person. Margaret Cho will be on hand to provide entertainment. For students, there’s a big recruiting play with over 90 companies there to acquire talent. For professionals who may be making their next career move, there are programming and networking opportunities as well.

“It’s a beast,” jokes Kidd.   “It’s mind-boggling how popular it’s become. We project about 1,500 people to attend, and we are trending ahead of normal. And this all started in a classroom at Harvard.”

For more information about ROMBA and the blockbuster annual conference, visit www.reachingoutmba.org.