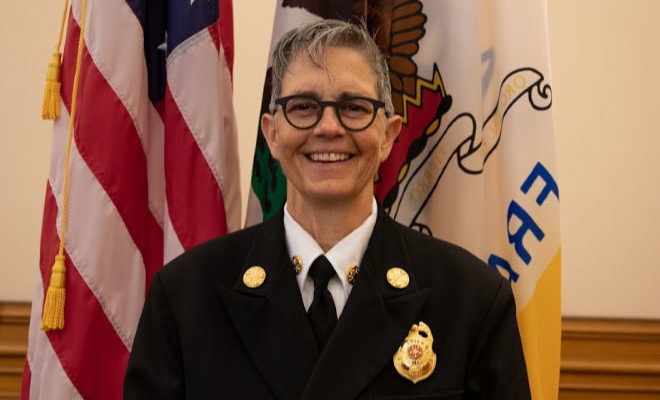 San Francisco Fire Chief Jeanine Nicholson: “I never thought I would be here”

When Jeanine Nicholson moved to San Francisco from New York in 1990, she was in search of a community where she could set down roots as a queer woman. Almost 30 years later, she was named the San Francisco Fire Department’s first openly LGBTQ Fire Chief.

Nicholson lived across the street from a fire station when she was little, accompanying her father there when he went to vote. She liked visiting, but it never occurred to her to consider a career in fire fighting.

“There weren’t any female firefighters,” she said. “I didn’t have any role models, no women to inspire me at the time.”

That changed when Nicholson went to a parade and encountered Anita Paratley, an SFFD firefighter since 1989.

“I was working in construction when I first moved out here,” Nicholson said. “I went to the PRIDE parade in 1991 and a woman from the fire department, Anita, handed me a recruitment card. It turned out to be a perfect fit for me.”

“I love bringing calm and solutions to chaos”

As a child, Nicholson was an athlete and a tomboy. Full of energy and a knack for problem-solving, as an adult she quickly discovered that her strengths and talents were uniquely suited to firefighting.

“I found out that I loved bringing calm and solutions to chaos,” she said. “Every day brought a different challenge and I could use both my body and my brain to overcome them.”

Nicholson worked her way up from firefighter to firefighter paramedic to lieutenant to captain to battalion chief, accumulating skills and experience out in the field that she feels are crucial to being an effective leader.

“I think that’s really important to have a leader who knows this job inside and out,” she said. “I’ve been the boots on the ground, I’ve been in the field. I know this city and the department, so when Mayor Breed appointed me to this position, I was ready to work with my team to steer us in the direction we need to go.” 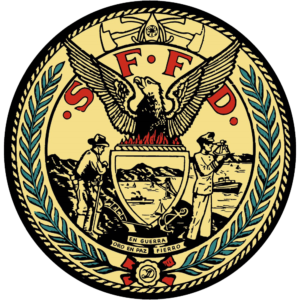 “Deputy Chief Nicholson is a dedicated public servant and a tremendous leader and I can think of no better person to serve as our next Fire Chief,” she said. “Her experience and her resiliency have prepared her to lead the men and women who are out there every day protecting our residents.”

Nicholson’s vision for the city includes some big goals, such as finding solutions for the city’s homeless and opioid crises.

“We are the folks on the front lines of these crises,” she said. “We’re working on innovative programs to address them on a whole new level from expanding community paramedicine programs, to focusing on EMS prevention instead of seeing people on the back end all the time, to working with public health departments and emergency rooms.”

Disaster preparedness is another area where Nicholson is focusing resources. The department conducts active shooter training “around the clock” as well as drills for earthquakes and other scenarios.

“We are a resilient city and a resilient department, but we’re looking at different ways to bolster our disaster preparedness,” Nicholson said. “We’re partnering with other departments, reaching out for grants to get more equipment and training, examining how we prioritize our budget and trying to do innovative things to get the most bang for our buck.”

Last autumn the department hosted California Lieutenant Governor Eleni Kounalakis and other elected officials at the city’s Treasure Island training facility. The goal was to educate them on what the department does, and why they need the equipment and resources they request.

“SFFD is always ready to go, but I’d like to give our people the best training and best equipment,” Nicholson said. “So we invited several men and women from City Hall, and our badass Lieutenant Governor, to a training exercise. We took them through a training scenario where they had to locate and rescue a person from a burning building. They loved it!”

Diversity and inclusion are top of mind for Nicholson. SFFD was heavily criticized in the 1980s for its lack of diversity and the department has worked to improve ever since. When Nicholson joined in 1994, she said she encountered more resistance because she was a woman than as an LGBT individual.

“I’ve been out my entire career,” she said. “Being queer wasn’t an issue. Coming in as a woman, I experienced some resistance. At the time, there were only about 50 women in a department of 1,500 people.”

Nicholson credits those other women with being trailblazers and sought to make them proud. As Chief, she is aware that many people are now looking up to her, too.

Nicholson places high importance on increasing recruitment and visibility within the city’s diverse neighborhoods. She tasked the department’s recruitment coordinator and ERG’s with sending people out to under-served, under-resourced communities throughout San Francisco to talk about opportunities within the department.

The importance of having a diverse department cannot be overstated in Nicholson’s opinion. She remembered earlier in her career she was called to assist with the death of a Chinese woman. The EMTs draped a cloth over the woman’s body but her family insisted that the cloth not cover her head because it was part of their cultural practice.

“They wanted her to be able to see her way to where she was going, but that’s not something any of us knew,” Nicholson said. “Having people from different backgrounds in the department means they’re trusted in different ways that maybe we weren’t before because we represent the community. Diversity helps us serve the community better.”

“I want to give kids an opportunity”

Working with youth in San Francisco is an especially keen desire for Nicholson. It harkens back to her own discovery of the career that was a perfect fit, one she never considered as a child.

“I never thought I would be here,” she said. “I could not have imagined this for myself as a child. I am so very lucky and grateful, and I certainly did not get here alone. I stood on the shoulders of the people who came before me and with me. I’m so grateful to be working with all these incredible people, from our Mayor to all of our firefighters, EMTs and paramedics. I’m a pretty darn lucky person.”

She participates in Camp Blaze, a free, week-long camp for girls and young women that teaches leadership and empowerment based on firefighting skills. She also works with the NorCal First Alarm Girls Fire Camp, a free, two-day camp where girls learn about and experience some of what firefighters do.

“It’s important that these camps are free so everyone can attend, no matter their income,” she said. “These experiences instill a sense of confidence and opens their eyes to opportunities, not just firefighting.”

Nicholson has an even bigger goal to reach the next generation of firefighters.

“My one dream is to bring EMT classes along with life skills classes to youth in under-resourced communities,” she said. “I want to give kids an opportunity to check it out and see if that’s something they’re interested in. Some people just want an opportunity and they’ve never had one.”

That dream is in the works – Nicholson and her team are researching, finding funding and meeting with community leaders about collaborating in hopes of launching the program within the next year.

← Previous Story Queer Board Match: Connecting volunteers with opportunities to serve at the next level
Next Story → Stories of COVID™ Interview Archive Project