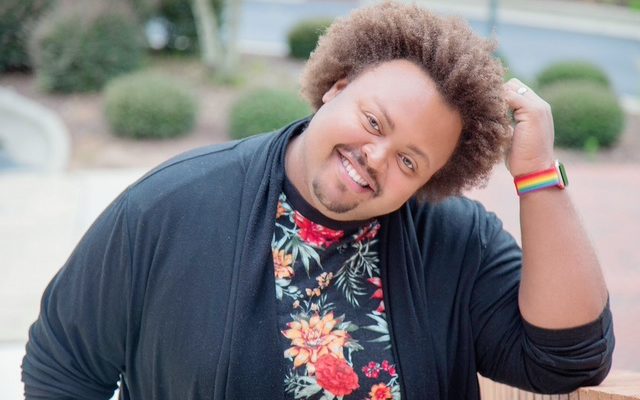 “Somewhere over the rainbow”

It’s not easy to rise above the ashes when your entire world seems to be quaking at your feet.

It’s even harder to find your voice, after years of shutting it down.

But, once you have made the choice to live fearlessly and embrace your personal power, Dr. Jonathan P. Higgins — who goes by DoctorJonPaul on social media — says the sky is the limit.

With a TedX CSULB talk, hundreds of media credits and a script in the works, Higgins is a scholar, a journalist, an activist, media critic and advocate who is using their platform to give a voice to queer/trans people of color through media while encouraging people to unlearn their fears and reclaim their power.

And they are doing it all with unfailing kindness and determination.

“My mom would always tell me, ‘you catch more flies with honey,’ and that’s something that I kind of just used as a brand strategy,” Higgins said. “People know DoctorJonPaul for one thing — and that’s the thing.”

Higgins knows it could have been different and they walked a long road to reclaim and own their power. Growing up poor in a strict religious household in Southern California, they struggled to reconcile who they were versus who the world wanted them to be.

They grew up with a love of song, telling everyone they knew that they would be famous one day — a proclamation that a childhood friend would nurture and encourage against all odds.

“I’m a Black man,” Higgins said. “I’m a Black man who is extremely effeminate, who is queer, who is loud about being queer — God forbid a Black person be loud — and I’m fat. So, I wake up every day to this notion that the world is doing everything it can to get rid of me because it hates everything about who I am.”

So, Higgins persevered. They went to college and earned a Master’s of Business Management and an Educational Doctorate of Leadership in Justice.

They began writing and presenting about living fearlessly and reclaiming your voice.

And then it almost came crashing down.

In July 2017, after a string of tweets critiquing heteronormativity and “well-meaning white women” went viral, Higgins was fired from their position as the leader of the Claremont Colleges’ Queer Resource Center. It was just a month after they had taken on the role.

It was a huge blow and Higgins could have easily decided to give in to the defeat. It would be easy to give in to the fear and anxiety that say “you are not enough”. But Higgins said giving into that fear is what the world wants marginalized communities to do. That’s why in the face of it all, they have made a choice to move beyond it.

“I think there’s something in me that says, ‘If y’all are going to hate me anyway, then I’m out to go do whatever I want to do that’s going to make me happy,’” Higgins said. “I have to live fearlessly because I cannot let whatever the world has created around me keep me in fear.”

Higgins began cultivating a brand, working as a media critic and journalist, keeping a presence as an activist online. Through it all, they have attracted a social media following of more than 20,000 with a kindness and positivity that is almost unheard of these days.

They often receive messages from their followers thanking them for their words. In an age where hostility often prevails on social media, Higgins is a breath of fresh air.

“I think that that’s the thing that has helped me in my career in terms of getting into places and getting into spaces and really connecting with people,” Higgins said. “I think that’s a strategy that we don’t talk about enough in business. Oftentimes it’s about ‘the hustle,’ or it’s about stepping on people’s toes, and I opted to not do any of that.”

That’s not to say there’s not some hustle involved — and with the schedule Higgins keeps, there has to be. But the difference, they said, is the approach.

Higgins said people remember — and respond to — kindness. The simple act of asking what you can do for someone, even while you are seeking their help, can do wonders. By listening to each other, working with each other, helping each other, Higgins is using the DoctorJonPaul brand to reach higher and farther than ever before.

Some of those connections include “Pose” co-Creator Steven Canals, who has become a friend and a mentor. It’s that simple act of reaching out, Higgins said, that is crucial in helping open doors for other queer people of color in media.

Higgins credits their higher education for helping them recognize that understanding people is imperative to running a profitable business. With that in mind, Higgins finds that they are able to resonate with people simply by being honest about their own journey.

“That’s the one thing that I’ve learned to center in all of my work,” Higgins said. “I’m going to tell my truth. I’m going to speak my truth the way I need to speak it and discover who it resounds with or who it connects with. If it doesn’t connect to you, that means I’m not for you.”

Sometimes living fearlessly takes a lot of work and self-care. Higgins credits their partner for helping them decompress and refresh between speaking engagements and assignments. Prioritizing that relationship is important to maintaining that relationship.

Therapy, they said, is also important. Understanding and knowing that you are human, that you are not perfect is a big part of embracing your power. It’s helping them continue moving forward, pushing through the “no’s” until they get the “yes.”

We caught up with Dr. Jonathan Higgins after the onset of the COVID-19 pandemic to see how they’re faring and learn more about what they’re up to…