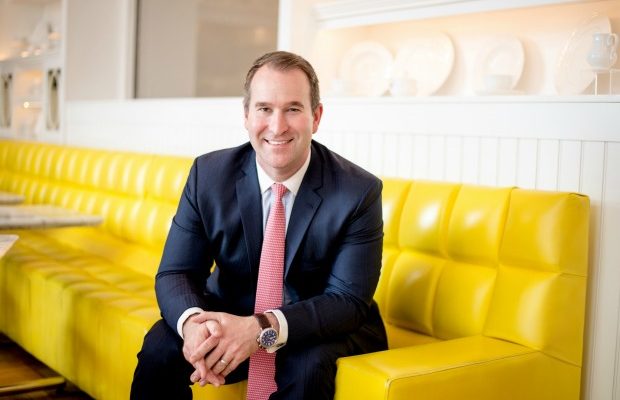 Sears is the founder and principal of Out Leadership, a global LGBTQ business advisory organization that helps companies understand that including LGBTQ people at all levels will benefit their bottom line.

“I go into everything we do with an expectation on the part of our partner, that they’re going to receive some sort of ROI,” Sears said. “The flip for the LGBTQ community is that having these companies engaged, it puts them in the hot seat so they do actually have to progress LGBT inclusion as part of achieving the ROI that they want from a business perspective.”

Sears’s journey to founding Out Leadership began just a few weeks into his first job on Wall Street in the late 1990s. The young analyst was shocked when he overheard a homophobic boss use the “F” word in reference to another employee.

“I did what pretty much anybody does with a homophobic boss [at that time],” he said. “I went back in the closet and started looking for a new job.”

Sears, who had been out since his freshman year at Duke University, left his analyst position at the firm after eight months and vowed to never hide his sexuality again. By 2001, he was working at Merrill Lynch, where he leveraged his access to the LGBTQ market to help the firm win more business.

“I started to make that connection between LGBTQ inclusion and business and the access that I had to a marketplace that was obviously a pretty affluent, wealthy market,” he said.

Wealthy indeed; within a year, Sears had brought in $100 million of business. He raised that to almost $2 billion in four years.

Money aside, Sears realized that by showing his firm that a progressive attitude toward the LGBTQ community was good for the bottom line, he was able to change the thinking within big business about such inclusion.

The business plan he put together was the first ever at the firm to focus on bringing in wealth from the LGBTQ community. In order to do that, Merrill Lynch had to put its own non-discrimination policies and domestic partner benefits in place.

“They had to actually engage in the community,” Sears said. “I was able to cement that connection between really driving business and driving inclusion.”

Fast forward to the fall of 2010 and a few jobs later, he used a severance check to fund a summit that included members of six banks and was hosted by the CEO of Deutsche Bank.

By March 2011, Out Leadership was born. Since then, 71 companies have become members. Considered the first global LGBTQ organization, Out Leadership has sponsored summits on five continents attended by more than 4,000 business leaders. Counting Time-Warner CEO Jeff Bewkes, who hosted the May 5 summit in New York, 310 CEOs have been speakers at summits worldwide.

“When people talked about LGBTQ stuff six or seven years ago, it was only around civil rights and generally driven by HR,” Sears said. “I’m really proud of the fact we now have CEOs all around the world—sometimes in LGBTQ unfriendly places—saying that LGBTQ inclusion is good for their business.”

But Sears isn’t resting on his laurels. He said Out Leadership has a lot more work to do on a global scale.
“It’s still illegal to be gay in 78 countries and in all 78 of those countries, corporations are doing business,” he said. “I want to continue to expand the conversation and leverage our model of business and LGBTQ inclusion to drive some change in some of those places.”

Along with its summits this year in London, Hong Kong and Sydney, Out Leadership recently launched a new diagnostic tool, called Out Leadership IQ (OLIQ), that will help companies around the world to measure the strength of their policies and practices.

He’s also excited about shaping the future LGBTQ business leaders around the world. And through programs such as OutWOMEN, Quorum and especially OutNEXT he gets to do that. The OutNEXT summit in July will bring 135 emerging leaders from around the world to New York for development.

“These kids are rock stars. They’re just awesome,” he said. “They’ve been out since they were 12 and they don’t have any of the baggage that a lot of the folks in my generation and older have from being in the closet for a while.”

Sears broke down the closet door for the last time when he left that first job. The same year he founded Out Leadership, Sears married Chris Garvin, who does sustainable architecture.

“I get to create change for a living in a positive way,” he said, “and I get to engage these CEOs and business leaders and see the light bulb go off.”

Todd Sears, founder and principal of Out Leadership, says he’s optimistic that with the current political climate, “we may see a little bit of backsliding as it relates to LGBTQ rights, but I actually don’t think it’s going to be much,” because so many companies are forward-thinking these days they won’t reverse their own policies. Sears offered this advice to LGBTQ individuals on keeping things moving forward in their lives.

“It’s been the truism of the movement for 30 years: it’s hard to hate what you know. In America, 92 percent of the public doesn’t know that you can be fired in 29 states for being gay. The way that we change hearts and minds is to be visible and personalize the issues. I think that’s even more true now.”

“Not liking a government official is probably the most common pastime in the U.S. right now, but protesting just because you don’t like him is less effective. If you’re always yelling, when you actually have something to yell about, no one will listen. React against something specific.”