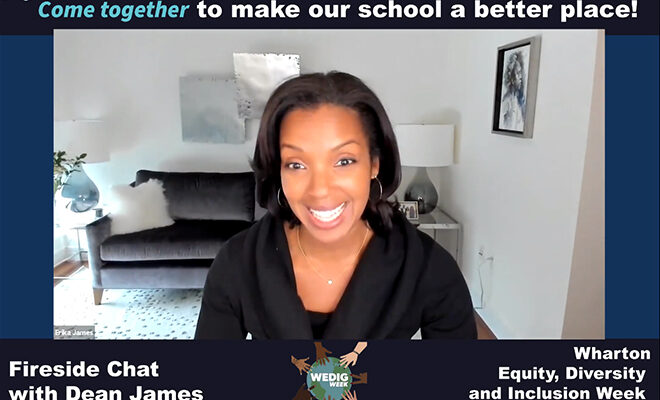 Elite business schools have been historically dominated by cis-gendered, straight white men, and are rarely models of inclusive spaces for BIPOC, LGBTQ+ or low-income individuals. As a gay and biracial junior at the Wharton School of the University of Pennsylvania, I have grown far too familiar with imposter syndrome and feeling like I was not represented in the classroom.

Experiencing a lack of belonging, especially during my first year, motivated me to get involved in the diversity, equity and inclusion (DEI) space as one of the first co-chairs of a new student organization, the Wharton Equity, Diversity & Inclusion Group (WEDIG). In May 2020, WEDIG was founded to be a champion of DEI at our school and to create an environment where every undergraduate student can be and feel included regardless of their background or identity. 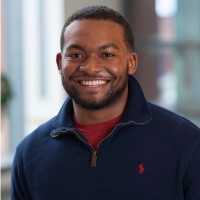 Since starting, we have recruited a 20 person board and organized projects and initiatives targeted at improving representation in academic and extracurricular spaces. We have created partnerships with other student clubs and affinity groups and have met with administrators to advocate for programs to inclusify our institution. One of WEDIG’s crowning achievements, though, was a first-annual event called WEDIG Week, hosted by Class of 2021 alumna Ryan Pruitt.

Held in April 2021, WEDIG Week was a celebration of DEI bringing over 170 students, club leaders, administrators and experts together into a conversation about how we can better ourselves and our institutions. The celebration occurred over five days via Zoom, with eight online events centered around four themes: diversity, cultural inclusion, allyship to equity and intersectionality. Every day had panel discussions or workshops that were hosted by WEDIG students and included guests ranging from BEQ Pride’s publisher Robin Dillard to Wharton Dean Erika James.

I was proud that these events had strong orientations toward achieving concrete change in our school. One student representing Wharton’s First-Generation Low-Income (FGLI) group pointed to the subject of socio-economic diversity, which is often avoided in discussions at Wharton. Hearing about the experiences of FGLI students who have been excluded from clubs’ social events or wearing club-branded Patagonia quarter-zips because of the cost was definitely impactful. But further, students talked about actionable ways that clubs could work to include FGLI students, and made recommendations for the creation of specific FGLI mentorship programs.

As someone already passionate about DEI, hearing various participants’ perspectives on the reasons they care about the topic was especially powerful. During a multicult

ural town hall event with student leaders from several of Wharton’s affinity groups, including Wharton Alliance for LGBTQ+ students, Black Wharton Undergraduate Association and others, students shared their connection to DEI with a beautiful range of answers. From constantly feeling like the “only one” in many rooms to recognizing that being surrounded by diverse perspectives makes each of us better in a globalizing world, each of these influences gave yet another reason to stay actively engaged especially after a fatiguing virtual semester.

Though everyone was passionate about DEI for different reasons, seeing people come together was both inspiring and a symbol of a community forming where no one would be the “only one” in the room. I saw the drive students and collaborators had to collectively push our School and the business world forward. WEDIG Week felt like a manifestation of the past struggles for DEI, combined with an analysis of the present state of our School and inspiration to change its future. 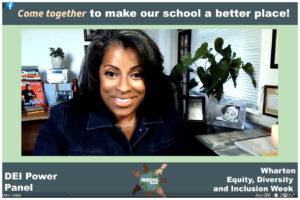 Going into senior year, WEDIG Week reminded me that there is substantial work to be done. Many people will need to get involved, including allies, faculty and the business community. More than this though, it gave me renewed energy and confidence that we can truly move the needle forward, creating a diverse, equitable and inclusive community not just at Wharton, but beyond. Each of us can be a part of making the broader change we want to see, and it all starts by carefully evaluating our own teams, organizations and communities. How will you play a role?
Learn more about WEDIG at groups.wharton.upenn.edu/wedig. 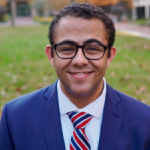 Javion Joyner is a rising senior at the Wharton School of the University of Pennsylvania studying Business Economics & Public Policy and Legal Studies & Business Ethics. Javion is a former co-chair and current member of the Wharton Equity, Diversity & Inclusion Group, a student organization dedicated to improving underrepresented students’ belonging in Wharton. Follow him on LinkedIn.