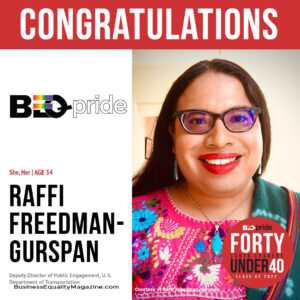 I stand with the most vulnerable, marginalized or oppressed individuals and open doors for them to walk through. In this moment of time, when LGBTQ communities around the nation and globe face tremendous hurdles, despite our victories in the last few decades, I remain committed always to my people – in all their beautiful diversity – to ensure their voting rights and voices in government are maintained, that they have access to democratic and civil institutions regardless of gender identity, sexual orientation or expression and that their rightful place in society as equal members are thoroughly upheld.

Raffi Freedman-Gurspan is an amazing person with a life story that sounds like a movie. Born in Honduras and adopted at a young age by a family in Brookline, Massachusetts, Raffi has defied the odds over and over again and built a career based on social good. She was the first openly transgender staffer to work at the White House. Raffi recently announced her new role with the Biden Administration Department of Transportation as the next Deputy Director of Public Engagement. Prior, Raffi was Deputy States Director for the All on The Line campaign of the National Redistricting Action Fund, an affiliate of the National Democratic Redistricting Committee chaired by former U.S. Attorney General Eric Holder. All On The Line is a public advocacy campaign committed to ending partisan gerrymandering and creating fair district maps in the states during the 2021-2022 redistricting cycle.

Raffi has worked in non-profit and government sectors for more than a decade. She was the Director of External Relations at the National Center for Transgender Equality (NCTE), where she oversaw public education and field organizing operations. She was also a Senior Associate Director for Public Engagement, where she served as the primary liaison to the LGBTQ community, and an Outreach and Recruitment Director for Presidential Personnel at the White House from 2015-2017. Raffi currently sits on the United States Holocaust Memorial Council as an appointee named by President Barack Obama. She is also a board member of SMYAL, a service provider based in Washington, D.C., which works with LGBTQ youth, and she is a board member of TIMES UP Foundation and TIMES UP Now, organizations that aim to create a society free of gender-based discrimination and harassment in the workplace.

Her experience and roles also include Policy Advisor for the Racial and Economic Justice Initiative; a Legislative Director in the Massachusetts House of Representatives; LGBT Liaison for the City of Somerville, Massachusetts and work with the Massachusetts Transgender Political Coalition and at Boston University’s Women’s, Gender & Sexuality Studies Program. She is a graduate of St. Olaf College in Minnesota.