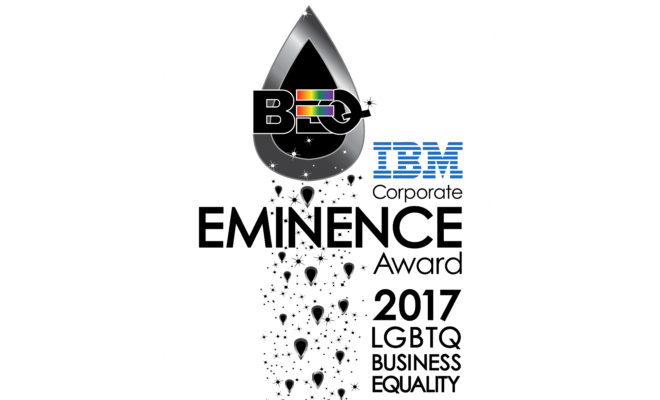 By BEQ Pride Editorial Board and Awards Review Committee

Our definition of Eminence is a conferred high status or importance due to marked superiority in LGBTQ business equality. The BEQ Pride 2017 LGBTQ Corporate Eminence Award is a designation of distinction for one of our 107 LGBTQ Business Equality Excellence Awardees in their outstanding efforts to include the LGBTQ business community.

Ideal candidates are actively engaged with both certified LGBTQ business enterprises and in growing their outreach to the overall LGBTQ business community. Candidates consistently demonstrate leadership, creativity and commitment to LGBTQ business development and diversity and inclusion through LGBTQ procurement, technical, operational and managerial assistance and/or sponsorship of or to related programs.

The four finalists for the 2017 BEQ Pride LGBTQ Corporate Eminence Award represent the Electric Services, Banking and Insurance industries. Each organization’s approach to LGBTQ inclusion is unique and demonstrates their commitment to diversity and business equality. Congratulations to Ameren, JPMorgan Chase and Nationwide.

It is our honor to announce that the winner of the 2017 BEQ Pride Corporate Eminence Award is IBM.

A Pioneer in LGBT Inclusion

IBM has long been a pioneer in the area of LGBT inclusion. The company added sexual orientation to its nondiscrimination profile in 1984, implemented domestic partner benefits in 1996 and introduced the LGBT constituency into its global supplier diversity program in 1999. Core to IBM’s corporate culture is the belief that diversity goes beyond fair hiring practices and protection for all employees. It includes a focus on how those disparate pieces fit together to create an innovative, integrated whole.

“Simply put, it’s what we do together that sets us apart because we truly recognize that we are only as good as our people. All of our people, regardless of race, gender or sexual orientation,” said Michael Robinson, Program Director, Global Supplier Diversity.

IBM was the first Founding Corporate Partner of the National Gay & Lesbian Chamber of Commerce, and in 2016 was recognized with the inaugural APEX award by the Human Rights Campaign and the NGLCC in recognition of the company’s commitment to inclusion of LGBT individuals and equitable opportunities for LGBTBEs.

Championing Supplier Diversity from the C-Suite

IBM’s corporate policy provides diverse businesses with opportunities to participate in all areas of the company’s marketing, procurement and contracting activities. Supplier diversity, and providing opportunities to the LGBT community, are directly tied to the Chief Procurement Officer’s performance plan and cascaded throughout the entire supply chain’s performance appraisals. That level of commitment from the C-suite translates to a comprehensive supplier diversity mandate throughout the organization.

IBM’s global diverse spend in 2016 was $2.6 billion, of which $2.1 billion was with Tier 1 diverse suppliers. Although spend per diversity category is not public, the company reports that spend with LGBTBEs exceeded previous years. But there is still work to do.

“The dollar amount spent with LGBTBEs is not what we wanted, but it did increase incrementally,” Robinson said. “To continue increasing this amount, we have a policy where we seek diverse suppliers in every RFQ in every geography in which we operate. This means there are opportunities for LGBT suppliers in over 170 countries.”

In 2016, suppliers reported $576 million in Tier 2 spend to IBM, exceeding the annual goal by $14 million.
Additionally in 2016, IBM enhanced their Tier 2 initiative by placing additional focus on the global program. This enhancement requires Tier 1 suppliers to report their subcontracting spend by geography as well as diverse category.

“As one of the few, if not the only, programs that is global, we are ensuring that diverse suppliers are given opportunities to compete for our Tier 1 suppliers’ business while increasing our supplier diversity performance,” Robinson said.

Global Tier 2 spend reached $20 million in 2016. The company anticipates that number will increase with the change to the initiative.

NGLCC co-founders Justin Nelson and Chance Mitchell cited the company’s status as the first Founding Corporate Partner as evidence of IBM’s commitment to LGBT diversity and inclusion in the supply chain, marketplace and workforce. Further, they said, IBM is an active supporter and participant in global LGBT diversity.

“As NGLCC expands globally, IBM’s support of the LGBT community is unwavering both within U.S. borders and beyond. IBM’s commitment to global LGBT diversity should be commended as their peers in the corporate space look to IBM’s example for their own efforts towards enterprise-wide diversity and inclusion.”

In 2016, IBM facilitated face-to-face meetings in several countries between the NGLCC and IBM’s procurement teams in India, South Africa and Latin America, in addition to the United States. The company also has a supplier diversity team which focuses on LGBT business needs globally, providing assistance from a technology viewpoint to help LGBTBEs globally grow and compete.

Last year, as a result of an IBM-initiated LGBT Executive Forum, IBM India initiated Project Vayati. In collaboration with like-minded companies, Project Vayati partnered with Interweave Consulting and the Solidarity Foundation (an NGO) to mobilize, engage and up-skill transgender persons who are highly marginalized in society, and attempt to bring them into mainstream vocations. The pilot program intends to understand the challenges and facilitate placement of transgender individuals into jobs.

“Our goal is to advocate a program that provides economic opportunities to traditionally disempowered diversity groups in each country in which we operate, in adherence to local legal requirements,” Robinson said.

“We seek LGBT suppliers to participate in these programs so they can increase capacity, increase innovation and provide products and services to IBM globally,” Robinson explained. “We have had LGBTBEs take advantage of these offerings, which are available to all diverse groups.”

IBM also participates in mentoring programs for both commercial suppliers and federal suppliers. These programs foster relationships and provide advice and counsel to small and disadvantaged businesses.

“Our goal through mentoring is to not only make the diverse supplier a better IBM supplier, but a more effective and resilient supplier to all corporations within their respective industry,” Robinson said.

A Legacy of LGBT Business Equality

For nearly five decades, IBM has been a leader in supplier diversity. They are at the forefront of LGBT inclusion in the workplace and in the supply chain through innovative supplier development programs and a global supplier diversity initiative that provides opportunities to LGBTBEs in 170 countries.

In addition to receiving the inaugural Apex Award from the HRC and NGLCC, IBM has been recognized for its support of LGBTBEs as World’s Most LGBT-Inclusive Company by the Workplace Pride Foundation, as a Star Performer LGBT-friendly workplace by the Stonewall Global Equity Index, consistently scored 100% on the HRC Corporate Equality Index and been honored by a broad spectrum of organizations and publications.

St. Louis-based Ameren is actively engaged in outreach opportunities to promote and support LGBTBEs. The company partnered with the Gateway Business Guild and the Small Business Administration to host a Ready, Set, Go series in St. Louis, where local LGBT business owners were educated on ways to grow their business to the next level.

“Ameren’s commitment to LGBT equality is rooted in our core value of respect. When co-workers, suppliers and community partners feel accepted for who they are and what they can bring to the table, we have a team that is positioned for success,” said Warner Baxter, Chairman, President and CEO.

A founding member of the NGLCC, JPMorgan Chase is dedicated to helping remove the obstacle of access to capital from small and diverse businesses. As part of that mission, the company led an Access to Capital panel discussion at the NGLCC annual conference in 2016. Subject matter experts from across the company spoke on topics such as accessing capital and navigating the SBA.

JPMorgan Chase & Co. is the only financial services company to receive a perfect score for each consecutive year on the HRC’s Corporate Equality Index since the benchmarking survey began.

Collaborating with other third party organizations, Nationwide deploys cutting edge Professional Development Programming all over the country for all diverse suppliers including NGLCC members. Thus far, events have been held in Chicago, Dallas, Las Vegas and Austin with more than 500 diverse suppliers participating.