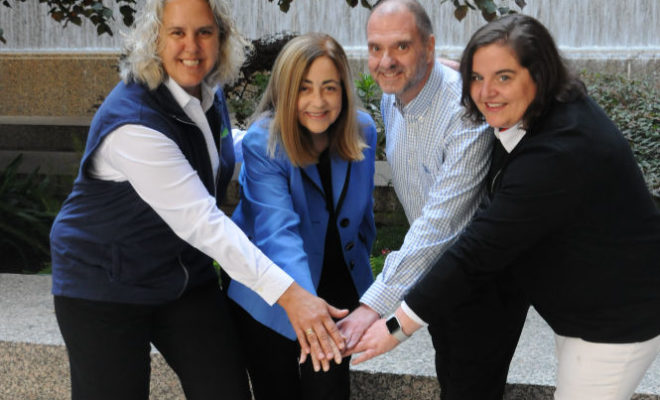 The Business Equality Network and BEQ Pride magazine define Eminence as a conferred high status or importance due to marked superiority in LGBTQ business equality. The BEQ Pride 2018 LGBTQ Corporate Eminence Award is a designation of distinction for one of our 156 LGBTQ Business Equality Excellence Awardees in their outstanding efforts to include the LGBTQ business community. Among the pool of applicants for the award, three companies were selected as finalists: Cummins, Johnson & Johnson and Pacific Gas & Electric.

Among the finalists we saw established supplier diversity programs embracing LGBTBEs, adding resources and reaching out to LGBTQ entrepreneurs. We saw wonderfully inclusive workplaces with thriving LGBTQ and Ally resource groups, wholehearted participation in PRIDE events and genuine care that every employee feel that they can be their authentic selves at work.

These are achievements worth celebrating. But the future of business equality requires building on the strong foundation laid through decades of affirmative action, diversity and inclusion, supplier diversity and other programs. After 50 successful years of engaging diverse suppliers, including over 19 years of active engagement and inclusion of LGBTQ enterprises and the birth of the NGLCC in 2002, there are signs of a renewed level of long-term commitment, strategic engagement and resource allocation. One company demonstrated that they understand this and they are all in on business equality.

PG&E impacts millions of lives in California through their 20,000 employees, partners and vendors. In addition to their direct impact on the communities they serve, their indirect impact on lives beyond California’s border is a model for business equality worldwide. We are pleased to recognize the marked superiority and distinction of PG&E with the BEQ Pride 2018 LGBTQ Corporate Eminence Award.

In 2012, PG&E was the first California utility to expand their supplier diversity program to include LGBT businesses. Since then, the company has fully integrated LGBTBE’s into the reporting and sourcing processes, into internal and prime supplier training and into key initiatives that have helped the company sustain industry-leading results. Being a first mover has its advantages, it means you set the pace and PG&E is not only a pacesetter for California utilities, but setting an aggressive pace for companies across the country and beyond.

Last year, PG&E spent $2.6 billion with certified LGBT, minority, women and service-disabled, veteran-owned businesses – more than 42 percent of total procurement spend. Those numbers are impressive, but they reflect more than just dollars. For PG&E, partnering with diverse suppliers is the key to sustainability and innovation.
“As the energy landscape evolves, we look to LGBTQ and diverse suppliers to embrace change, be more innovative and continue to improve while helping us become more efficient and effective in providing gas and electric services to our customers,” said Joan Kerr, director, supply chain responsibility. 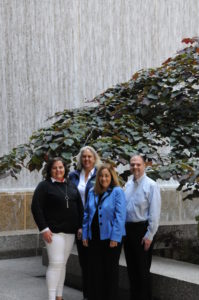 “Having a presence and supporting affiliate chambers is the equivalent of ‘boots on the ground’,” says Robin Dillard, publisher of BEQ Pride magazine and one of the Eminence award application evaluators.

PG&E is also a corporate member of the National LGBT Chamber of Commerce (NGLCC) and actively participates on NGLCC’s Corporate and Procurement Councils. NGLCC applauded PG&E’s leadership and support of the LGBTQ business community by recognizing the utility as NGLCC’s Corporation of the Year at its November 2016 awards gala, as highlighted in the Winter 2016 issue of BEQ Pride.

In 2017, PG&E hosted two large LGBTQ events at its San Francisco headquarters to support workplace equality and LGBTQ inclusion: “The How and Why of Being an Ally” – a two-hour workshop in partnership with PFLAG to educate and engage PG&E employees in how to be an active LGBTQ ally, and “Out at Work” – a public annual seminar started in 2015 to educate employers on how to support, retain and recruit transgender individuals into workforces. Over 40 companies and community groups attended in 2017. Since forming, PG&E has partnered with the SF LGBT Center, the Transgender Law Center and the Trans Employment Project to advance Transgender inclusion.

PG&E was a very visible supporter of Pride Month activities in San Francisco, Sacramento, San Jose, Fresno and San Luis Obispo last year. The company had a presence at each of these locations and talked with the public about PG&E services, marched in the parades and participated in event planning councils. Through employee engagement and outreach, the San Francisco Pride Parade has become PG&E’s single largest volunteer event each year, with over 400 employees, friends and family members joining the parade. This level of participation is another visible demonstration of their support of the LGBTQ community.

In keeping with the company’s long-term strategy to grow diverse talent, PG&E annually distributes seven $6,000 scholarships to LGBTQ youth to attend college through a partnership with the eQuality Scholarship collaborative. PG&E was the founder of the scholarship collaborative and together with corporate and non-profit partners has distributed over $1 million over the last two decades.

PG&E encourages all prime suppliers to participate in supplier diversity and report Tier 2 spend. The company reports that 55 percent of LGBTQ supplier spend in 2017 was through subcontracting from prime suppliers.
Monthly prime supplier webinars and in-person training provide background to understand the history of PG&E’s supplier diversity program, as well as guidance to develop a comprehensive plan, report correctly and consider steps and systems required to comply with an audit of reported results. Online research is also available for prime suppliers.

But here is where PG&E is proving to be a leader in supplier diversity. In addition to the above best practices, the company hosts the Prime Supplier Academy, a three-year-old program that provides in-person training to prime suppliers.

PG&E recognizes that facilitating supplier diversity education and commitments from 200 prime suppliers is the best way to exponentially grow diverse business engagement. Having prime contractors increase their diverse spend at Tier 2 and 3 levels, engage in strategic partnerships and mentoring is a sustainable method to reach billion dollar spend goals.

Building a Bridge for LGBTQ Suppliers

“While there have been many successes integrating this important category, there continue to be challenges related to the limited number and types of LGBTQ businesses that have the capacity to meet PG&E’s specific industry needs,” Kerr said.

To address these needs, PG&E established and implemented several strategies. Internally, the Supply Chain Responsibility team worked to introduce one new LGBTQ business, and in some cases multiple LGBTQ businesses, to each of PG&E’s business areas. Supply Chain Responsibility team members scheduled introductory meetings between Supplier Diversity Line of Business Champions, decision makers and qualified LGBTQ suppliers to share capabilities and discuss opportunities. The intent of these efforts is to align LGBTQ suppliers to be prepared as future needs for their products and services arise at PG&E.

During Pride month, PG&E held its second-annual “Out for Business” LGBTQ Workshop in partnership with three California LGBT chambers of commerce. The event featured a presentation from a successful LGBTQ business owner on how to take businesses from surviving to thriving. In addition to this training, the workshop also connected 34 LGBTQ businesses to PG&E Sourcing and Line of Business decision makers and to PG&E prime suppliers. In total, more than 80 connections were made. This specific, targeted outreach to LGBTQ businesses exemplifies the idea of Eminence. PG&E is not just embracing diversity but actively providing access for LGBTQBEs and entrepreneurs to achieve business equality. The company’s strategic focus on building a stronger supply chain now and in the future through supplier development, collaboration with diverse groups and continual outreach to the LGBTQ community is exemplary of Eminence.

In addition to PG&E, our finalists are all visible allies of the LGBTQ community. Johnson & Johnson participates in Reaching Out MBA and Lesbians Who Tech events to recruit new talent, flies the rainbow flag at several facilities during Pride month and signed on to support the UN LGBTI Standards of Conduct for Business and the CEO Action for Diversity & Inclusion™.

Care with Pride also includes a five-year commitment to supporting LGBT Youth through anti-bullying education. The initiative has already donated over $1 million to efforts against bullying. The Care with Pride team was recognized by the Family Equality Council with an Impact Award, celebrating LGBTQ families and honoring those who have made a significant impact in the fight for equality, in 2017 and 2018.

Johnson & Johnson has received a perfect 100% rating from the Human Rights Campaign for over a decade and was named the 2018 #1 Company for Diversity and Inclusion by Diversity, Inc. In 2015 the company received the 20/20 Visionary Award from the Trevor Project and the 2015 GLSEN Respect Award.

Since 2011, Johnson & Johnson has been a member of the Billion Dollar Roundtable (BDR), an organization that promotes and shares best practices in supply chain diversity excellence, and members review common issues, opportunities and strategies. The BDR encourages corporate entities to continue growing their supplier diversity programs by increasing commitment and spending levels each year. In August 2017, the BDR membership voted to expand the criteria in evaluating a corporation’s billion dollar supply chain spend on diverse-owned businesses to include certified LGBT Business Enterprises. In alignment with this decision, effective January 1, 2018, Johnson & Johnson includes NGLCC certified suppliers in its Tier 1 diverse spend reporting.

“We believe that when our supplier base reflects the diversity of the consumers and patients who use our products and services, we achieve our mission of helping people live longer, happier, healthier lives,” said Len DeCandia, chief procurement officer.

Headquartered in Southern Indiana, Cummins took a stand by raising the LGBTQ flag at corporate headquarters to celebrate Pride month. This visible support of the LGBTQ community is matched by the company’s leadership in the State of Indiana as an advocate for LGBTQ equality and the talent, innovation and creativity it enjoys through LGBTQ inclusion.

Cummins leadership is also actively involved with the NGLCC by participating in local and national events and assisting with certification site visits. Since 2016, Michelle Cooper, Indiana logistics leader, has served as an Indiana regional LGBTQ certification applicant Site Visitor.  She has also recruited other Cummins Pride Affinity Group members to serve as regional Site Visitor volunteers in Tennessee, North Carolina and South Carolina.
Internally Cummins promotes an inclusive workplace through its LGBTQ Safe Leader Training, which equips employees with tools to serve as allies and advocates for the LGBTQ community in the workplace. Since its creation in 2008, over 2,000 employees in eight countries have completed the training.

Cummins has received a 100% rating from the Human Rights Campaign every year since 2008, been ranked one of Diversity, Inc.’s Top 50 Best Places to Work for 12 consecutive years.