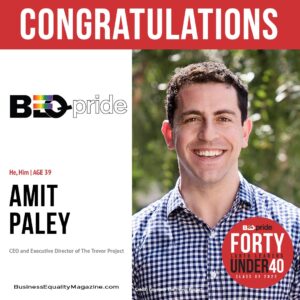 CEO AND EXECUTIVE DIRECTOR OF THE TREVOR PROJECT

As always, we will continue to do all we can to remind LGBTQ youth that they deserve love and support and the ability to live their lives without fear, discrimination, and violence.

These statistics are from The Trevor Project’s 2021 National Survey on LGBTQ Youth Mental Health and they shed light on many challenges faced by LGBTQ youth. The survey captured the experiences of nearly 35,000 LGBTQ youth ages 13–24 across the United States. These survey responses are the reason for The Trevor Project and its leader of almost 5 years is working to reverse these statistics.

As CEO and Executive Director of The Trevor Project, the world’s largest suicide prevention and crisis intervention organization for LGBTQ young people, Amit Paley started his journey with Trevor as a counselor on the 24/7 TrevorLifeline in 2011. Since then he has answered hundreds of calls from LGBTQ youth in crisis. Under the leadership of this former journalist, management consultant and adjunct professor, The Trevor Project has received acclaim as one of the most innovative and technology-driven nonprofits in the world.

A new, integrated crisis services platform expanded chat and text service availability to 24/7, increasing the number of youth served each month by more than 400%. Simply put, The Trevor Project is having an impact. The organization now operates the largest grassroots campaign in the world to end conversion therapy – lives are being saved.

Amit is also on the National Suicide Prevention Lifeline Steering Committee and the Executive Committee of the National Action Alliance for Suicide Prevention to ensure the voices of LGBTQ youth have a seat at the table in the suicide prevention movement. The Trevor Project estimates that more than 1.8 million LGBTQ young people seriously consider suicide each year in the U.S. alone. As he leads the organization to continue expanding service reach and programs, Amit hopes to globalize the movement and allow The Trevor Project to support LGBTQ youth in crisis around the world.