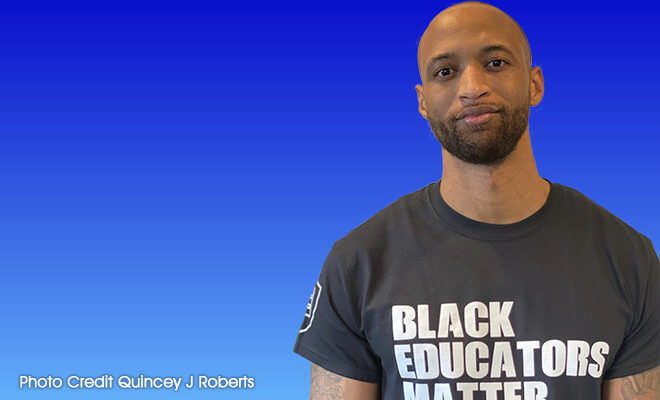 Connection to others sustains us. Connection forms the memories that comfort us during periods of isolation. Connection builds trust, allowing us to support others through their most vulnerable moments. Connection fuels our purpose, granting us the power to remain resilient and conquer any obstacle.

Corey Yarbrough has dedicated his entire professional career to social justice. Yarbrough co-founded the Hispanic Black Gay Coalition (HBGC) in 2009 with his then partner (now husband) Quincey. In 2016, Yarbrough joined the founding team of the Brooke High School and 8th Grade Academy at the Brooke Charter Schools in Boston as its only administrator of color at the time. As director of operations, Yarbrough is responsible for making sure the educators are free to focus on the students and academics. Most recently, Yarbrough played a leading role in designing the school’s response to the novel coronavirus.

In a 2015 The Rainbow Times Mass article, Yarbrough talks about wanting his legacy, “in terms of the LGBTQ community, to be that of self-empowerment and entrepreneurship. I want folks to see HBGC and my life as an example of what is possible when you pull the resources from your own community to provide for your community with pure intentions.”  He goes on to say, he wants “folks to see me and realize that age can’t stop you, sexual orientation can’t stop you, race can’t stop you, even being a transplant to Boston can’t stop you.” Finally, he says he wants his “legacy to inspire someone else to create or build on something that inspires the next person and so on.”

It appears Corey Yarbrough has done just what he intended—inspired us all to create and build on what we believe. Yarbrough’s nominator says “he hadn’t even turned 30 before he called my office and asked if we might have a conversation.” At the time it did not take long for people of color to recognize the holes in the fabric of the LGBTQ community in terms of race and ethnicity. From the beginning, Yarborough set out to make a difference.

After graduating with a B.A. in Justice Studies and working as a community organizer for economic and educational equity, he took a stand in Boston to fill a void for Black and Latinx LGBTQ people. In 2009, Yarbrough co-founded the Hispanic Black Gay Coalition (HBGC) and served as its Founding Executive Director from 2009 – 2016. At the time, HBGC was the only organization solely dedicated to the unique needs of Boston’s Black and Latinx LGBTQ community.

The creation of the organization reflected the “for us, by us” model and led to hiring people from the community to create and implement solutions for the community. HBGC empowers the Black and Latinx LGBTQ community to improve their livelihood through activism, education, outreach and counseling. The growth of the organization is a testament to Yarbrough’s self-starter personality and his ability to design community responses that meet or exceed the equity needs of people of color and LGBTQ communities.

Under his leadership, the non-profit hosted the largest conference for LGBTQ youth of color in New England, earned national attention for creating Gender & Sexuality Alliance (GSA) organizations in urban schools, established an LGBTQ mentorship program, and launched a variety of leadership development and support programs for youth and young adults.

Following his tenure at HBGC, he continued to lead in other ways to tackle underlining systems of oppression that prevent upward mobility for LGBTQ people and people of color. In 2016, Yarbrough joined the founding team of Brooke High School as it’s founding director of operations.

As the school’s only administrator of color at the time, Yarbrough played a leading role in establishing policies and programs for the school. Throughout the school year, he provided ongoing operational support to ensure thriving students and teachers focused on the urgent task of educating.

Yarbrough played a leading role in designing the school’s response to the novel coronavirus pandemic. He led the launch of virtual instruction, equipped students with laptops including necessary internet access, coordinated a meal pick-up program, and created remote platforms for supporting emotional health.

Yarbrough consistently meets the evolving demands of his leadership role, as evidenced by his annual school leadership survey results yielding the highest favorable scores of all district level directors of operations.

Yarbrough hopes that the next decade for the LGBTQ+ community includes trailblazing ways to empower every member of the community so “we can truly feel liberated in a self-sustaining way.” Yarbrough sees this as involving the uplift of LGBTQ leaders in different sectors and to learn from one another, share resources, and work together to ensure equal access to opportunity and resources.