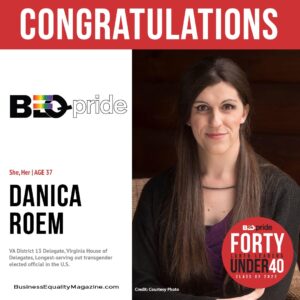 LONGEST-SERVING OUT TRANSGENDER ELECTED OFFICIAL IN THE U.S.

My number one job as an elected representative isn’t to speak. It’s to listen to the residents, write down their concerns, ideas and questions, follow up with them and work what they tell me into my policy platform. That’s how I took notes and wrote news stories and that’s how I’ll craft public policy: Research. Question. Listen. Report.

LGBTQ Victory Fund endorsed candidate Danica Roem won reelection to the Virginia House of Delegates, ensuring she remains the longest-serving out trans state legislator in U.S. history. Roem defeated an anti-LGBTQ opponent in a key swing district to do it. This was Roem’s second reelection win since becoming the first out trans person to win and serve in a state legislature in 2017.

“Danica’s voters again chose a qualified trans leader over an anti-LGBTQ opponent – rejecting the so-called ‘culture wars’ that aim to divide, not improve people’s lives. While Danica’s energies are focused on her district, the impact of her leadership resonates across the country. Danica exemplifies the winning recipe for trans candidates: exemplary constituent services and a hyper-focus on the issues that matter. She has inspired dozens of trans people to run for office across the country and each victory is certain to inspire more.”

In 2021, Danica Roem introduced a bill that banned the “trans panic defense”. Historically those charged with homicide were allowed to receive lesser sentences after they argued in court that they “panicked” when they learned of a victim’s sexual orientation or gender identity. Virginia is the first state in the South to end the heinous defense strategy. Since 2013, the District of Columbia and the states of California, Illinois, Rhode Island, Nevada, Connecticut, Maine, Hawaii, New York, New Jersey, Washington, Colorado, Virginia, Vermont, Oregon and Maryland have banned such defenses. Legislation is pending federally as well as in multiple states.