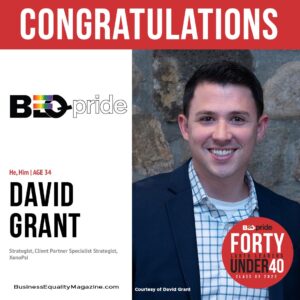 Currently, our system only works for a few and we must change that. I believe my responsibility is to stay vigilant and ensure that we are leaving the next generation a planet that is healthy and a democracy that is intact and works for all. At this moment we are being tested. We must answer the call to step up and work together for our future. We can not stay silent and rest on our laurels, we must continue to fight for a more perfect union.

David has worked at all levels of government, from the United States Senate down to a small town mayor’s office in New Jersey. He worked his way up the ranks in New Jersey politics with a focus on making the country a more equitable and welcoming place.

David has been involved in LGBTQ+ policy and advocacy since his first internship at Equality Maryland (EqMd). During his time at EqMd, he developed a transgender resource portal for the organization. Additionally, he co-founded the New Jersey LGBTQ+ Caucus where he worked with others to elect pro-LGBTQ state and local officials. He also worked on numerous inclusive laws in New Jersey like banning the “gay panic defense”, streamlining the requirements to change gender markers on state documents and changing the laws regarding HIV status disclosure.

As a volunteer, David worked on both then-Mayor Pete Buttigieg’s Democratic National Committee (DNC) race in 2017 and later Secretary Pete Buttigieg’s run for the presidency as the NJ Lead Organizer from 2018-2020. David is currently on the Board of Bebashi Transition to Hope in Philadelphia which provides health, job, clothing and food services for the underserved LGBTQ+ community in the Philadelphia area. It is David’s hope that the LGBTQ+ community realizes full equality across the country and that we finally put an end to anti-trans violence by standing together.

David recently got married and the couple will be moving into their new home in southern NJ in early 2022.