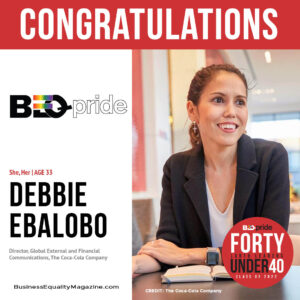 In the past couple of years, my definition of responsibility has evolved to become more proactive and empowered. Prior, I thought the best I could do was to keep my head down and hope that my success would inspire someone, somewhere. In retrospect, this belief came from my learned behavior of self-preservation as a gay, mixed-Asian immigrant. As I speak to students and others in the industry, I’ve recognized my responsibility. This became the catalyst to creating monthly meetings with students. Moreover, I’ve been an active board member across multiple employee resource groups, including the Asian Pacific Islander and LGBTQA+ inclusion networks.

Debbie Ebalobo is an inspiration and a rock star. She was the first person in her family to graduate from college. She is a first-generation Filipino immigrant. Debbie says she, “pursued a career in communications because of the impact of storytelling. As a mixed-Filipino lesbian, stories were the catalyst to my growth. They made me feel seen and less alone. As a member of both the LGBTQ+ and Asian American community, I rarely saw myself in the stories or the people in the world around me.”

Debbie Ebalobo is a Director, Global External and Financial Communications at the Coca-Cola Company. In her current role, she is responsible for communications on matters of global public policy and reputational risk. Previously, Debbie led communications for Coca-Cola North America’s still beverages, including steering the PR launch of AHA sparkling water, the first major brand launch in a decade for The Coca-Cola Company’s flagship market. Prior to Coca-Cola, Debbie worked in various industries including automotive, motorsports, pharmaceutical and telecommunications.

Media from the University of Georgia (UGA). While at UGA, Debbie created the first diversity council at the Grady School of Journalism and Mass Communications, received the award of ‘UGA Amazing Student’ and won a PRSA Silver Anvil as a senior in college for her work on the United States Census with the UGA Bateman team.

Her journey as a first-generation Filipino immigrant drives her passion for increasing Asian American visibility and educational/professional opportunities for underrepresented communities. Her experience as a gay woman in the Asian community also drives her to be more visible within her organization as well as externally.

She is an active board member across multiple employee resource groups at the Coca-Cola Company, including the Asian Business Resource Group (BRG) as well as the LGBTQA BRG. Externally Debbie co-chairs the Consumer Goods Forum’s Plastic Waste Action Coalition, which aims to bring value to the existing efforts against plastic waste. Outside of work, Debbie enjoys learning about meta-learning. Debbie resides in Atlanta with her fiancée Lexine and puppy Kobe.