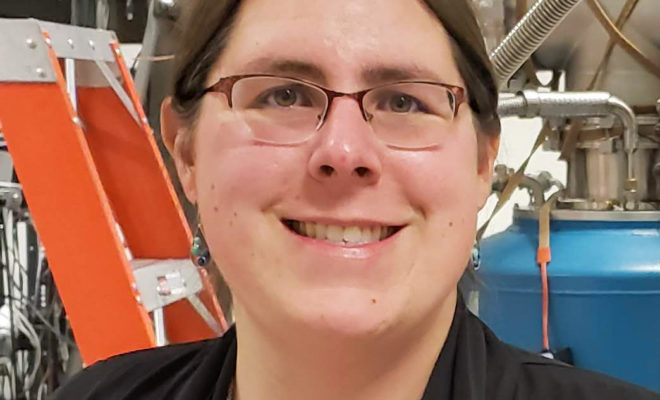 Dr. Elena A. Long earned her Ph.D. from Kent State University where she successfully defended her thesis in 2012, on  Polarized3He(e,e’n) Asymmetries in Three Orthogonal Measurements which provides important tests of models that use Helium-3 as a neutron target. She is an assistant professor of physics at the University of New Hampshire where she is researching the ways that a tensor-polarized target can be utilized to understand nuclear effects with a focus on understanding how the quarks inside of protons and neutrons come together to form atomic nuclei.

An activist for LGBT people in science, Elena founded lgbt+physicists to address issues of discrimination against LGBT people in physics and provide networking opportunities for gender and sexual minority (GSM) physicists. Elena worked with the American Physical Society to organize and publish the LGBT Climate in Physics report, first of its kind research which included a statistically significant data set on professional transgender scientists. The report exposed the sobering reality faced by many LGBTQ+ physicists: 30% feel pressure to stay closeted at their institutions; greater than a third considered leaving their institution within the year prior to taking the survey; and 50% of all transgender or gender non-conforming individuals reported harassment in their department.

Community is a vital part of everything Elena does, from her day-to-day life to her queer activism to her scientific collaborations. She believes the only way to have a better tomorrow is if we support each other to get there, and in particular make sure that we are supporting those who tend to have the least power in current systems.

Elena is a huge nerd with hobbies that include virtual reality, 3D printing and she recently became a ham radio operator. One of her favorite things to do is to share a nice quiet evening at home with her husband, Julian, and their two cats.