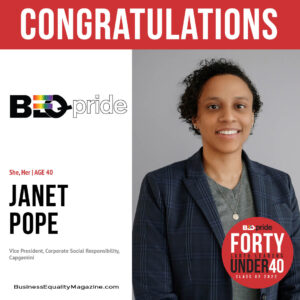 We are in one of the greatest transformations of the workforce of my lifetime. Professionally, my responsibility to this moment in history is to reinvent how Capgemini engages employees across remote and in-office environments now that video call fatigue has grown roots. This moment is the best opportunity of my career to expand how Capgemini thinks about teaming, inclusion and wellbeing based on clear lessons from the last two years. Personally, I’m focused on providing access to resources that support women, Black and LGBTQ+ communities with mental, financial and physical wellness through my new nonprofit: The GOOD Lounge.

During her career at Capgemini, Janet Pope shaped how the company evolved its inclusive culture. Back in 2012, as Capgemini’s first US Diversity & Inclusion Leader, she leveraged the Human Rights Campaign Corporate Equality Index to benchmark Capgemini’s LGBTQ+ policies and benefits and led the company’s rollout of an inclusive language policy and self-identification processes domestically and around the world. Janet initiated the firm’s business case to secure approval of transgender benefits many years ago. As a facilitator of unconscious bias training, Janet challenges program participants to expand their point of view on topics like intersectionality. She has coached Capgemini’s Employee Resource Groups to collaborate on initiatives to ascertain the core complexities of systems by exploring the impact of the intersection of specific demographics and identities; for example, Black transgender people in the workplace and society. Over the course of the next decade, Janet would like to see greater representation of Black Indigenous and people of color (BIPOC) LGBTQ+ individuals in leadership, positions of power and education. Cis, white gay men enjoy wide visibility and power across LGBTQ+ communities and platforms. This issue is covered in an episode of Capgemini’s North America Corporate Social Responsibility podcast called “Celebrating Pride in the Workplace” (https://soundcloud.com/nacr_radio/celebrating-pride-in-the-workplace) that Janet moderates. Janet cites the Dave Chappelle Netflix controversy as proof that most people have not considered the many identities and intersections within the LGBTQ community. His commentary seemed to omit the experience of Black transgender people who are in need of support, social advancement and protection from discrimination and violence.

Finally, Janet recently established a nonprofit organization and joined a new advisory board for another to address challenges beyond the corporate space. The GOOD Lounge is her new 501(c)(3) that leverages edutainment to raise awareness and provide resources on wellness topics (e.g., financial, emotional, mental and physical health) to better support ethnic minorities, LGBTQ+ people and women. Janet recently became a member of the advisory board of  Diverse by Design created by the nonprofit Per Scholas.