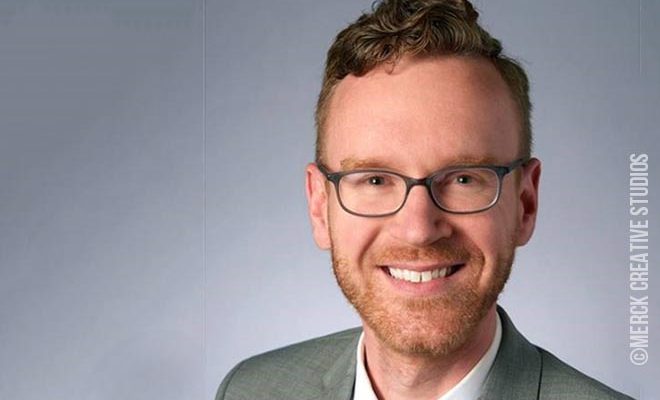 By 2030, biopharmaceutical careers will be a model of LGBTQ+ inclusion where everyone can thrive through visibility, community, policies, and support.

Jason is also the Global Lead (May 2018 – May 2020) for Merck Rainbow Alliance (MRA), Merck’s LGBTQ+ and Allies Employee Business Resource Group (EBRG). MRA, founded in 1999, is one of ten EBRGs at Merck. Jason became active in MRA’s leadership in 2017 as a Chapter Lead and was motivated by his desire to see a more visible community of LGBTQ+ colleagues and allies at work. As a result of his involvement, the organization grew from less than ~300 members with eleven mostly U.S.-based Chapters to today enjoying more than 850 members with more than 20 Chapters at Merck (MSD outside the US and Canada) sites around the globe.

Under Jason’s leadership, MRA was recently recognized as the oSTEM (Out in Science, Technology, Engineering, & Mathematics) 2019 LGBTQ Employee Network of the Year. The award was announced at the 9th Annual oSTEM Conference “Visibility Fuels Opportunity” in Detroit, MI.

But, Jason isn’t stopping there, he is planning to attend Reaching OUT MBA (ROMBA) in 2020 and continuing to provide avenues for Merck’s LGBTQ employees to access national networks and community for further enrichment, education and support.

Jason works with the Global Leads from the other 9 Merck EBRGs, Global Diversity and Inclusion, and Supplier Diversity to actively promote diversity and inclusion at Merck. Jason was part of the 2019 team that planned the EBRG Leadership Day training during GD&I Experience Month in September (for 60 EBRG leaders). This is particularly special as Jason came out globally in 2018, during the GD&I Experience Month kick-off video that focused on covering at work. Jason is expanding the MRA leadership team with new roles for Ally Outreach, Transgender Outreach, HIV Outreach, External Networks, and more. Jason has organized the contingent of MRA members attending the Out & Equal workplace.

Jason is also excited to be preparing for the AIDS/LifeCycle (May 31 – June 6, 2020). He is just getting started with training and fundraising and looking forward to the challenge, the new friendships, and supporting amazing HIV/AIDS organizations. The AIDS/LifeCycle is a fully supported, 7 day, 545-mile bike ride from San Francisco to Los Angeles, co-produced by and benefiting San Francisco AIDS Foundation and the Los Angeles LGBT Center. The event raises awareness about the ongoing HIV/AIDS epidemic and funds services such as HIV testing, prevention, care, and much more.