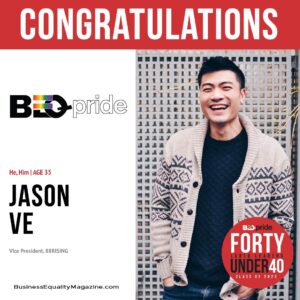 I want to uplift and shine a light on my Asian LGBTQ+ community. For too long I have felt I wasn’t Asian enough, or I wasn’t gay enough, or I wasn’t American enough. I felt as though my voice didn’t matter. But I’ve come to realize I am enough of all these things. It took me a while to share my story, but being intersectional and all of my unique life experiences that come with it, is what I’m proud of today. I feel a sense of responsibility to build community and platforms around amplifying underrepresented voices.

Jason Ve is passionate about advocating on behalf of the LGBTQ+ and AAPI community and he reflects a cross-section of both. His hope for the LGBTQ+/SGL community is to lift up the stories of those that are not heard and provide support to those who are marginalized and need help or additional resources. Jason is a vice president at 88Rising, an American multinational music company of Asian artists, and cofounder of Out in Tech Miami. Jason was head of strategic partnerships at Google and a strategy and business development analyst at Disney among other impressive roles. Jason is also a nonprofit advisor and an investor in companies with LGBTQ leadership. He plans to continue to use his voice and platforms whenever possible to lift up, connect and empower marginalized and diverse communities.

As a rising leader in the Asian LGBTQ community and son of an immigrant family, Jason works hard to give back to both his LGBTQ and AAPI communities, using his platform to raise awareness of the intersectional challenges for LGBTQ AAPIs. During the #StopAsianHate movement, Jason published an op-ed in Men’s Health piece called “No Asians” that went viral, shining a light on the unique perspectives and often-invisible issues of the Asian LGBTQ community. The piece was named after the phrase commonly used in gay dating apps that often went unchallenged for decades.

During his time at Google, Jason initiated the Gayglers China group when he was on a special assignment in the China office and noticed the absence of an LGBTQ ERG in the region. He’s also an advisor to Asian Americans Advancing Justice, a leading nonprofit for AAPI advocacy. Impressively, Jason also finds the time as an investor with a passion for diversity in VC. He’s a venture partner at Gaingels, the largest investment syndicate and network of LGBTQ investors, and has both invested in companies with LGBTQ leadership and helped diversify the cap tables of tomorrow’s companies with LGBTQ investors through his work with the Gaingels.