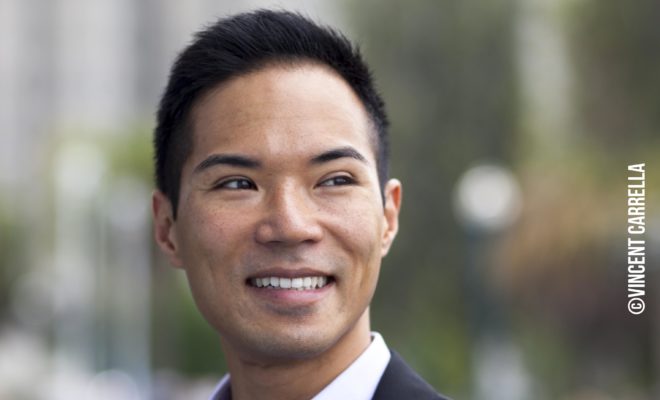 Evangelist and Award-Winning Champion for Equality

By 2030, there are only happy coming out stories because all sexual orientations and gender identities are acknowledged 👍, valued 🌈, and celebrated 🎉. “The closet” becomes known as simply the place that holds your clothes.

Jeffrey Huang is Senior Manager, Employee Engagement and Events at Salesforce. He is an evangelist and award-winning champion for equality. Passionate about developing inclusive programs that support and empower the entire LGBTQ community and beyond, he is a visionary, leader and role model on how to put your superpower to work for good.  From storytelling sessions about coming out to workshops supporting diverse families to dancing around the country to writing articles on inclusivity at events to cycling for a cause, he is a superhero.

Jeffrey Huang says he may have been influenced by all the “Captain Planet and the Planeteers” episodes he watched as a child, or it could have been the result of growing up as the gay son of immigrant parents in a Seattle suburb. Whatever the reason, for as long as he can remember, he has always wanted to make the world a better place.

In his adolescence, he volunteered at a local animal shelter and blood bank and held fundraisers for his school’s choir. At 18, as he was entering adulthood and after coming out, he became the youngest singer ever to join the Seattle Men’s Chorus—together with the Seattle Women’s Chorus make the largest community choral organization in North America. They stand out among the largest LGBTQ-identified choruses in the world.

In his 20s, as a dancer with a touring modern dance company, he performed in nearly every state in the US and in more than a dozen countries and taught workshops on the importance of creativity and collaboration. Now in his 30s, he repurposed his skills and experience to become a people manager at a large multinational company.

Across the decades, he has upheld his values of kindness, compassion and generosity and tried to increase his contribution to equality of all forms, including race, accessibility, and (most notably) sexual orientation and gender identity. Some recent accomplishments and projects of which he is especially proud of include raising over $1.65 million in the fight to end HIV/AIDS since 2015 with a diverse cycling team he founded—they are aiming to hit the $2M milestone in 2020!

He served three years as Global President for Outforce, Salesforce’s employee resource group for sexual orientation and gender identity equality. During his term, Outforce’s membership tripled to 4.2K global members, and he helped launch chapters in critical international markets (India, Singapore and Japan) where the LGBTQ community needs the most support. He also developed inclusive programs to support the entire LGBTQ community, including workshops on LGBTQ family planning, coming out storytelling sessions, and programming to educate and engage allies. And, he planned fundraising events for LGBTQ nonprofits at 3 Dreamforce conferences.

He was recognized with the Champion Award in 2018 by Out & Equal. He is an advocate for SOGI inclusivity at events including writing how-tos for LGBTQ and SOGI event planning. And at insights fostering inclusivity. He has even written an internal post at Salesforce on how to make holiday parties SOGI and faith-inclusive and accessible to people with disabilities—viewed by over 800 employees.

All because he is passionate about creating a more equal future for all, Jeffrey is generous with his time, his talent and his treasure. He is very proud of all of his work and all the progress thus far, there is still much to be done. He is committed to engaging allies, intersectionality, and building empathy and will continue to build a better future for the entire LGBTQ community and beyond.