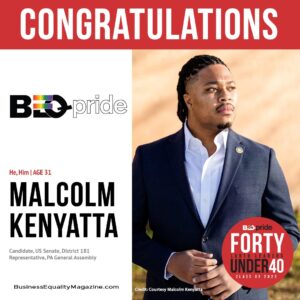 I have proudly fought for equal rights as a legislator in Harrisburg. It is unconscionable that while my rights might be protected to a degree where I live, on my commute to work, they can be violated with impunity. That is why I have fought so hard to pass nondiscrimination protections in the Pennsylvania House. As the first openly LGBTQ person of color to be elected to the PA General Assembly and the first to run for US Senate in American history, I understand that my success has been so much bigger than me. It has allowed so many young people to look up and see themselves — that matters.

Representative Malcolm Kenyatta currently serves as Vice-Chair of the Philadelphia Delegation, as a member of the Governor’s Task Force on Suicide Prevention, and in a host of committee leadership positions. As the first out LGBTQ person of color and one of the youngest members elected to the PA General Assembly, he is deeply committed to creating an equitable and inclusive society. As a legislator, he has championed proposals to address generational poverty, raise the minimum wage, protect workers’ rights, increase access to mental healthcare, stem the rise of gun violence and protect our digital infrastructure.

In 2016 and in 2020, he was elected as Delegate to the Democratic Convention, both times garnering the second-highest vote total of any delegate in the Commonwealth. He has also appeared in local and national media outlets to discuss systemic poverty, affordable education and childcare and making government more accountable to citizens. He was the subject of an award-winning short documentary about his election run, ‘Going Forward,’ produced by Seven Knot Productions, which premiered on ‘The Atlantic Magazine Selects’ in 2018. In 2020, he was chosen by President Joe Biden to give the keynote address at the Democratic National Convention along with a group of other ‘Rising Stars.’ He was one of twenty Electoral College votes cast for Joe Biden and Kamala Harris.

Malcolm lives in North Philadelphia, in the same neighborhood he grew up in, with his partner, Dr. Matthew Jordan Miller.