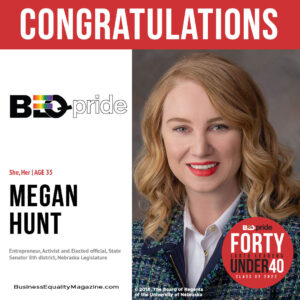 Senator Megan Hunt is an entrepreneur, activist and parent elected in 2018 to represent District 8 in the Nebraska legislature. She is passionate about public education, reproductive justice and gender equality and reducing brain drain in the Midwest. Since taking office, she has been a bold champion of progressive values, working with other senators from across the state to tackle issues of food insecurity, affordable housing, LGBTQ+ equality and clean energy in Nebraska.

Megan’s work and impact have been featured in dozens of publications including Forbes, INC, The Washington Post, Cosmopolitan, the Huffington Post, Buzzfeed and others. She is motivated by her goal of helping others translate their experiences into positive action and change in the real world.