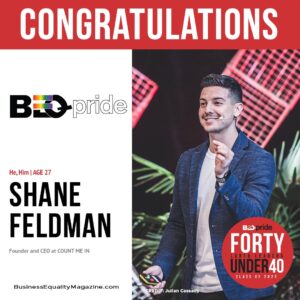 FOUNDER AND CEO AT COUNT ME IN

While I’ve been subjected to hate and discrimination, I recognize being a cis white gay man comes with innate privileges. Many of my freedoms were built on the backs of trans allies, black siblings, and friends of color. I believe it’s my responsibility to be a voice for the suppressed and help society leverage digital tools to enhance accessibility and inclusion. What I learned traveling across five continents is that community isn’t found, community is created. As a community builder, I feel called to help society move forward in this digital age without sacrificing our human connection to one another.

Shane Feldman believes strongly that it is important to be a vocal member of the LGBTQ+ community. Shane is the out and proud founder of COUNT ME IN, the international social entrepreneurship incubator that has launched more than 30,000 student-led community projects across 104 countries since its founding in 2011. Shane created COUNT ME IN as a high school project. With an alumni network now spanning six continents, COUNT ME IN is a global non-profit movement that has impacted more than 10 million people around the world. Since its founding, COUNT ME IN has contributed a value of over $2.6 billion to the global economy through service.

Without question, Shane is a role model for LGBTQ+ teens (and adults) around the world. As a cis white gay man, Shane realizes his privilege and is committed to speaking up and advocating for others now and always. Shane says “pride is about people from all walks of life, unapologetically living out loud. Pride is speaking up against injustice and using your voice for others. Pride is resilience, compassion and empathy. Pride is the courage to stand up when it’s so much easier and safer to just sit down. Pride is LOVE in all its forms. Pride is imagination, creativity and innovation. Pride is collaboration and problem solving, born from decades of unavoidable perseverance and struggle. Pride is unrivaled diversity and unconditional acceptance. Pride is energy and passion that drives us and unites us. Pride is community.”

As a shameless optimist, Shane wants a future with less suicide and more celebration. Less conflict and more unity. He believes it’s more than possible to build a new era of radical inclusion one step at a time. Steps at the government level, the corporate level and perhaps most importantly the grassroots level, with each person speaking up in the community.

As a celebrated serial entrepreneur and young activist, Shane Feldman has been featured by Larry King, Dr. Oz, Forbes, People Magazine and his children’s book A Kids Book About Community was even featured as part of “Oprah’s Favorite Things” collection in 2020. As a community and inclusion specialist, Shane has worked with some of the world’s most dynamic companies including Google, Microsoft and Disney, and he has been recognized by The White House, The Prime Minister of Canada and The United Nations for his achievements in community leadership.