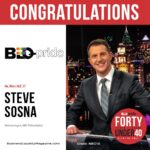 My responsibilities are changing as drastically as our climate. Instead of just giving 10-day forecasts, I’m using my on-air time to teach people of all communities how they can help mitigate these frequent weather disasters. I’m working on bringing climate education to the next generation of leaders through school talks and community programs. My purpose is to save lives during weather emergencies and help keep my neighbors safe. We share one planet; it’s imperative we act as one global community to save it.  It’s my responsibility to be out, proud, visible and vocal about these issues.

Steve Sosna is a meteorologist for the NBC10 First Alert Weather team. You can watch Steve’s forecasts weekend evenings on NBC10 and listen to his forecasts on KYW Newsradio. Steve is an active member of the American Meteorological Society (AMS) and has earned the prestigious AMS Certified Broadcast Meteorologist (CBM) seal of approval. Steve is also the recipient of a National Emmy for his award-winning work with StormRanger, NBCUniversal’s state-of-the-art, mobile, dual polarimetric X-band Doppler Radar.

Steve came to NBC10 in 2017 from WNBC-TV in New York City. He served as an executive weather producer since 2011 for the network’s flagship station. He also routinely filled in on-air at MSNBC during severe weather, and on shows such as “Early Today”, “Andrea Mitchell Reports”, “Meet the Press Daily”, “MSNBC LIVE”, “AM Joy” and “The Last Word with Lawrence O’Donnell”. During the devastating 2017 hurricane season, Steve covered major hurricanes Harvey and Irma for more than 12 consecutive hours on-air. During his time at NBC10, Steve has earned two NBC “GEM” (Going the Extra Mile) awards for collaborating and developing new weather technology for the station. He assisted the team in executing this technology across on-air, digital and social platforms.

Steve was born in Sellersville, Pennsylvania, and raised in Lansdale, where he attended Lansdale Catholic High School. He graduated from Kean University in Union, New Jersey, where he earned a bachelor’s degree in earth science with a concentration in meteorology.

Steve enjoys practicing good health and nutrition. He is a runner and a triathlete and competes in local competitions during the spring, summer and fall. He also loves to hike, travel and spend many days down at the Jersey Shore

An active member of the community, Steve enjoys helping disadvantaged kids in urban communities. He loves going to schools and sharing his knowledge and enthusiasm with the next generation. Steve also is involved with helping LGBTQ youth and does school talks across the area.