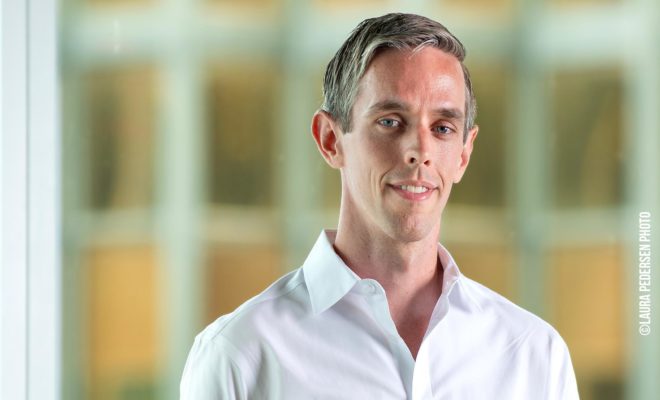 By 2030, LGBTQ+ people are no longer fighting for basic rights, but honoring those who did the fighting for us.

Steven Lewis is Legal Counsel for Capital One and spends much of his free time volunteering with marginalized populations and improving life circumstances for LGBTQ+ community members. He has had a passion for engaging in the community for many years—from volunteering as a high schooler to sitting on his first corporate board of directors at age 24 to his work through the Ontario Bar Association and more in the nonprofits in the disability, cancer and LGBTQ+ spaces. Steven is a formidable business leader delivering results for his company, while also building and leading in the LGBTQ+ community and beyond.

At work, he co-leads the LGBT Business Resource Group for Capital One and works to improve internal policies and community engagement (including launching their first marches in Canada – Toronto and Montreal). He also worked on hosting a refugee through Rainbow Railroad with a settlement team of volunteer associates.

Recently, Steven received two recognitions—first, he was named “Tomorrow’s Leader” award from Innovatio for legal innovation for his accessibility work. Secondly, he was named one of the OUTstanding 50 “LGBT+ Future Leaders 2019” by Involve and Yahoo! Finance.

Steven is most passionate about pursuing grassroots activism through any venue he can – including with his Inclusive Rugby team where he has helped lead an initiative to support inner-city and LGBTQ youth to take part and stay involved in rugby at no cost.

Over the past year, Steven has been Chair of the Sexual Orientation and Gender Identity Law section of the Ontario Bar Association leading initiatives to review family law legislation as it relates to LGBT people. He also works to bring attention to Two-Spirited individuals and illuminate how Indigenous LGBT peoples are affected by legal systems.

Steven is also an Equality Committee Member of the OBA; a Fund Development Committee member of Sherbourne Health, an LGBT+ and immigrant focused health center; Steven also volunteers with Camp OOCH, a camp for children with cancer. And of particular importance, Steven was placed on a provincial Steering Committee for the Inclusion of Trans People in Ontario Provincial Cancer Screening Programs, Steven’s efforts have helped shape and implement changes to the provincial cancer screening programs (cervical and breast) to better include and care for transgender patients who had often been forgotten or excluded. Steven was the LGBTQ adviser on this project and it was successfully launched in 2019. This could very well save the lives of members of the community.

Most recently Steven was appointed to the Global Leadership Council for the International Association of Accessibility Professionals, a division of G3ict an advocacy initiative launched by the United Nations Global Alliance for ICT and Development, in cooperation with the Secretariat for the Convention on the Rights of Persons with Disabilities. This position builds on the considerable work around disability and accessibility Steven has done over his life as a board member for Independent Living service providers and advocating for improved accessibility laws.

Steven is also an administrative judge on the Capacity and Discipline panel of the HRPA, as well as the Property Standards Committee for Toronto.