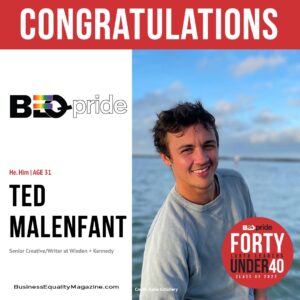 If we want a better future we have to show up.

I want to help queer, BIPOC and underrepresented communities show up more. And I’m not talking about in academic circles or liberal cities. I’m talking on billboards, in ads, on tv shows, on the news, in business and in sport.

If my lasting impact is that I show up for the people around me, I’ll be happy.

Ted Malenfant is a senior creative/writer at Wieden + Kennedy, the largest independent agency in the world, the first agency to be named AdAge Agency of the Year for three consecutive years and the only agency to win that honor five times. He is in the Wieden + Kennedy 1500+ employee global network. Ted has worked across Nike, Converse, Facebook, Instagram, Airbnb, Budweiser, Supercell, KFC, Samsung and many other brands, but he got his start writing global ads and content for Old Spice.

When it comes to what Ted wants for the future, he says for ”more queer and BIPOC people find their way into this career”— advertising. According to Ted, his queer liberal arts background did not necessarily scream take a job in advertising. Ted believes marketing and ads, whether we like to admit it or not, shape cultural dialogue in a way that political and academic discourse can not. His personal mission is to mentor and sponsor more queer people and people of color into every aspect of the industry, whether that be in the Wieden offices, the ad industry or in the creative industry both on- and off-screen. For Ted, the inclusion of voices of BIPOC and LGBTQ+ individuals in everyday dialogue is the most efficient and important way to ensure a more just and inclusive future. Since working at Wieden + Kennedy, every ad Ted has made has included a queer and/or person of color. Along with his creative team, they were the first to choose a black and female director, Millicent Shelton, to direct a set of Old Spice commercials. Ted was also the first creative to write and cast an openly queer actor, Keiynan Lonsdale, as the main character in an Old Spice commercial. Ted also wrote the public service announcement for Free The Work, a non-profit that ensures women and queer people a fair playing field in the film industry. Ted has written countless pieces of smaller content challenging gender roles and including queer people on- and off-camera. These all may seem like small things, but unfortunately, it is difficult to do, which is why he says we need more LGBTQ+ and BIPOC people in the room to move business culture forward.

Ted says he is here to “push the boundaries of creative and ensure that it will never be as hard for LGBTQ+ and BIPOC people as it was for me to succeed in this business. Most importantly as I list off all this cool stuff I get to say I’ve done, it wasn’t without the help of an amazing team of creatives and co-workers. The same co-workers who supported me through my transition.” To see more of Ted’s work and awards, visit https://tedmalenfant.com.