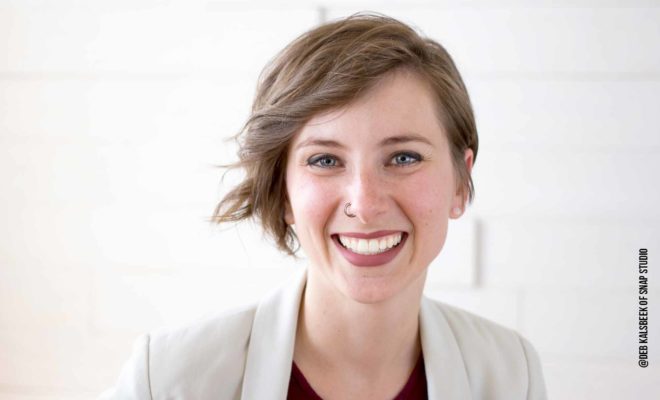 By 2030, my work with queer youth and elders will have forged partnerships bringing LGBTQ+ entrepreneurship to the forefront of innovation and creativity.

Serial entrepreneur, anthropologist, author, humanitarian – these are all words used to describe Veronica Kirin. Veronica is making her mark on the LGBTQ+ business community both locally and internationally—and she’s just getting started. Her drive to make an impact has already garnered recognition by the NGLCC: National LGBT Chamber of Commerce as the first NGLCCBE® in Grand Rapids, Michigan, as an invited speaker with the Canadian LGBT Chamber of Commerce (CGLCC) and been awarded the 2019 Corp! Magazine Diversity Business Leader Award for having a majority LGBTQ+ staff.

Veronica has worked hard since coming out to fearlessly self-identify in her business and personal life, despite living in a conservative region of the country—she actively supports other entrepreneurs in doing the same. Having founded seven businesses over the past decade and actively forging ahead with her dreams because she believes her dreams and aspirations matter she helps her clients achieve financial independence and safety — one of the best things in her view about entrepreneurship.

As a member of the LGBTQ+ community LGBTQ+ entrepreneurs, have an additional consideration and thus a need for preparation — they must decide to be out or not in business, and in either case, build this consideration into their business plan. With the current political and social climate in this country placing diverse communities under fire, entrepreneurship provides a level of independence and freedom, which in turn can create security.

Additionally, she is focused on empowering the LGBTQ+ community to fully realize their entrepreneurial dreams through her coaching business, workshops and speaking engagements. In recognition of the anniversary of the 50th Anniversary of the Stonewall Riots in 2019, Veronica wrote a powerful editorial to raise awareness about the disproportionate amount of bias that is inflicted upon trans people in the United States. She highlights how entrepreneurship can hold the key to financial security and a safe working environment that we all deserve—particularly those in the LGBTQ+ community.

By guiding LGBTQ+ people through their entrepreneurial journeys, she is empowering the LGBTQ+ community to provide, employ, and contribute to the community in a positive and productive way. She speaks around the world on entrepreneurship  She takes on audacious projects like her book Stories of Elders —national journey to interview 100 people from the Greatest Generation about their views on technology.  And she even ran a successful Kickstarter campaign that was chosen as “Staff Pick!”. And, she still finds time to volunteer on the Grand Valley State University LGBT Alumni Board as vice president.

Veronica also partners with organizations like HQ (for LGBTQ homeless youth), helps other LGBTQ+ business owners certify with the NGLCC and she is involved with the Sustainable Business Forum who know they needed to add diversity to their group and recognize that, while LGBTQ is not a federally protected group, it is, in fact, a critical voice and constituency for their organization to consider. Sometimes she finds she has to explain multiple times how a queer perspective strengthens a business, but eventually, the message gets through. Veronica is grateful for the opportunity to be recognized by BEQ Pride and strengthen the LGBTQ+ community even further!

Veronica recently moved to Los Angeles and joined the Long Beach LGBT Chamber of Commerce, and she is enthused about getting involved with Gay For Good (and actually starting a G4G chapter back in Grand Rapids, Michigan. In addition, she is hosting an “Out or Not (and how)” workshop for queer business leaders in early 2020 so business owners can plan for a brand and a business around their identity. And, she has embarked on the follow-up to her inaugural book Stories of Elders, by interviewing Gen Z youth.