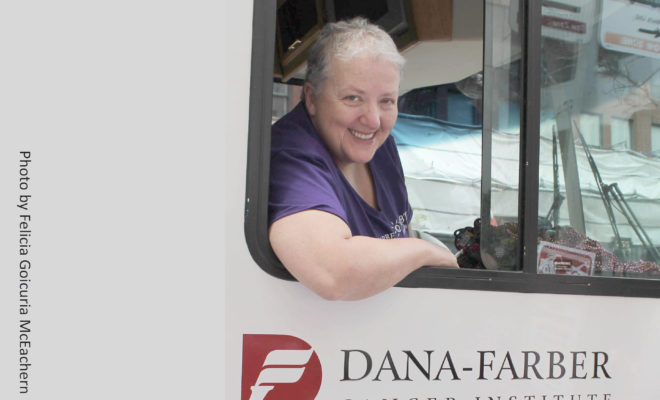 I was told a long time ago that my differences and passion might not result in changes for me but for future generations and the others that follow. I have found that not to be completely true and thank goodness for that. It’s a long journey and a strange trip I have been on.

Editor’s Note: The following narrative is in Cindy’s own words.

I was born the fifth of seven children and one of two gay children in a regular, nuclear family with the required man and woman parentage. I was a total lesbian from birth and my younger brother is also gay. My coming out was inevitable, but gay boys, oh boy! Me being very protective of my younger sibling was the start of my advocacy. I love the underdog. I will fight to the end and stand by all who follow me, good and bad.

I lived in Provincetown for around five years before coming to work in a large Boston hospital and there was no going back in the closet for me. At first, my workplace advocacy was about meeting some of my needs, then I recognized that my employer just needed an “in” with the LGBT community. They needed someone to help them understand and navigate what the LGBT community needs at work.  I threw myself on the sword along with a few colleagues. We let our needs be heard and let any question be asked. To my employer’s credit, they just needed some guidance and a push in the right direction to become more inclusive.

My institution became the first in Boston to have domestic partnership benefits. They began participating in the HRC’s Health Equality Index early on, and took a hard look at themselves and made the changes that lead to the institution becoming a leader in LGBT health care. When marriage became legal in Massachusetts, we talked about canceling domestic health care benefits, but the institute listened to us and kept those benefits in recognition of the complex issues surrounding same-sex partners from different states as well as issues with immigration. In deference to my LGBT colleagues and allies who wanted to have a voice in the proceedings, the institution joined other organizations in a Friend of the Court brief to the Supreme Court to strike down the defense of marriage act. When I heard the results of the Supreme Court’s decision, I rushed to human resources to be embraced by the entire staff and share some tears over the victory.