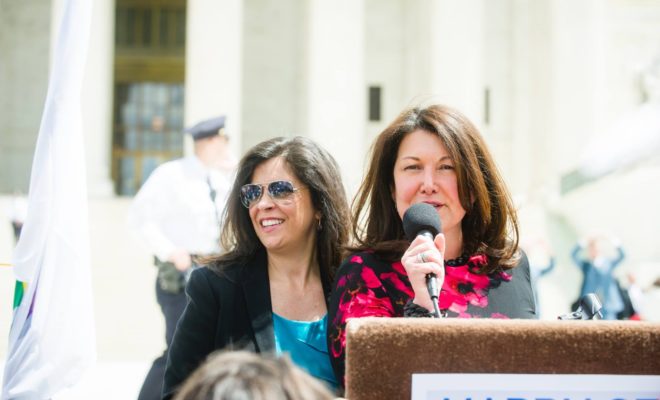 (Editor’s Note: The following narrative is in Ingrid’s own words.)

My wife and I live, love and work together. Our legacy as small business owners is that we blazed a trail for other Latinas. We were the first Latina/LGBT-owned government relations agency in Washington, D.C. and held that title for about 14 years before others followed. We were firm in our commitment and conviction when we launched our business in 2004—we were going to be out in every aspect of our lives including our business.

We were told by close friends that we should be careful about being out in business because there may be companies that won’t want to work with us because we are gay. Our response was then we don’t want their business and we weren’t going back in the closet. Fifteen years later our business has been incredibly successful and we have an amazing team that has contributed to every aspect of our success. We have worked with Fortune 100 companies, trade associations and nonprofits to advance LGBT and multicultural issues in all that we do. We have helped direct millions of dollars to non-profits in the LGBT and Latino communities.

Prior to starting D&P, Ingrid was President & CEO of the Congressional Hispanic Caucus Institute, where she expanded on an already extensive professional network that included members of Congress, elected officials and Fortune 500 executives.

Ingrid’s passion for social justice was sparked at the young age of 5, when she began attending farm worker rights rallies with her parents and participating in voter registration drives in her hometown of Los Angeles. Following a tour in the US Marine Corps, Ingrid worked for six years on Capitol Hill, serving under the Clerk of the U.S. House of Representatives, working on the House Banking Committee under the leadership of Rep. Henry B. Gonzalez, Chairman and Rep. Gene Green as a Legislative Aide. Ingrid also ran the Washington, D.C. office of the National Association of Latino Elected and Appointed Officials, where she was responsible for representing Latino community interests to Congress and the Administration. She was tapped by President Bill Clinton to serve on the President’s Advisory Committee on HIV/AIDS and was appointed by the Secretary of Veterans Affairs to the Minority Veterans Advisory Board.

In 2000, she became the first gay Latina to serve on the Human Rights Campaign (HRC) Board of Directors, and served as the Chairwoman of the National Hispana Leadership Institute (NHLI) and as a board member of The Gay & Lesbian Alliance Against Defamation (GLAAD), Futuro Media Group, The NCLR Action Fund and the LGBT History Museum Boards.

Her efforts as a strong and steadfast advocate for the LGBT and Latino communities have garnered her numerous honors, including the 2003 Premio Dignidad Award from LLEGO. Both HISPANIC and Poder magazines have named her among the Nation’s 100 Most Influential and Powerful Hispanics, and the former recognized her as a Latina of Excellence in 2004 and 2005. She was recognized by the Hispanic Women’s Corporation and The National Gay and Lesbian Task Force with their 2012 Leadership Awards. In 2013 Latino Magazine recognized her as a Power Player along with Working Mother Magazine who recognized her at their Women’s National Conference with their Legacy Award and Hispanic VIP with the Premio a la Excelencia for her work in the Hispanic community. In 2014 Latino Magazine recognized her in the Top 10 of 2014 and People en Español named her one of 25 Most Powerful Latinas in the U.S.

Ingrid’s work has attracted national media attention, gaining her coverage in The Washington Post, Los Angeles Times, San Antonio News-Express, Atlanta Journal-Constitution, Washington Post Magazine, HISPANIC Magazine, Latina Style Magazine, People en Espanol, USA Today, and The Miami Herald. She also has appeared on NBC, C-Span, Univisión and Telemundo. A passionate public speaker, Ingrid has presented on college campuses, conferences and to the media on GLBT, Latino, leadership and civil rights issues. She is a graduate of Park College, where she earned a B.S. in Organizational Management. She is a graduate of the Executive Program at Harvard’s JFK School of Government and the Corporate Governance Program of Harvard Business School.