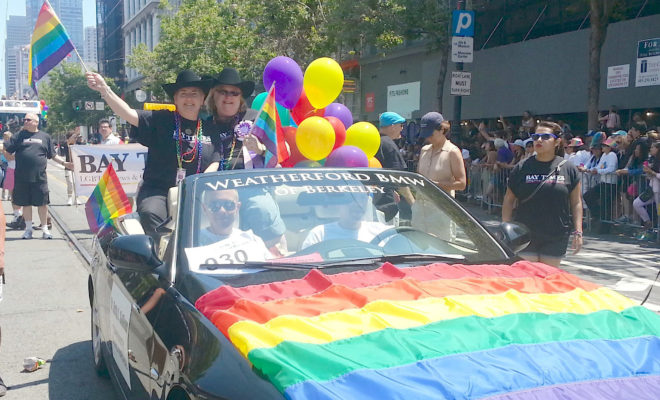 The best advice that I have ever received can be summarized in three words: “act as if” (I weren’t afraid, diminished or overpowered). It helped me to overcome challenges in Oakland. The Stonewall activists did much the same by asserting the right to be their authentic selves.

(Editor’s Note: The following narrative is in Jennifer’s own words.)

Growing up in East Oakland during the Stonewall Period was, for me, a daily challenge with the simple goal of survival. I suspected that, someday, we could be one of those families that you read about every so often in the paper with a headline like: “Relative Shoots Self and Family.” The day actually came, but I summoned up every ounce of strength in my small frame and helped to change fate. It was the last day that my family was together.

The direct human threat—taken away by police, along with guns—was gone, but years of litigation followed. My mother, with major health problems, and I were left with bills and seemingly overwhelming financial challenges. With no male in the family, people on the streets used to throw rocks at us and yell, “Lesbians!” Just a few weeks ago, at a restaurant with my mother around Mother’s Day, a couple at a table near us pointed and snickered, “Lesbians,” as they both laughed. Women supporting other women—even if by necessity—seems to really threaten others. I came to embrace such labels and to empathize with all who are mistreated for just being their authentic selves.

I now co-publish and co-own the San Francisco Bay Times, the world’s first newspaper to be jointly and equally created by gay men and women working together. The paper, in its 41st year, helps to build community and bridge differences. The San Francisco metro area, however, has the third-highest rate of income inequality in the country. The political gains that we have earned remain fragile, especially given the current Supreme Court. Much work lies ahead.

I also was a founding member of the news team for the Discovery Channel, where I worked for decades. For the nonprofit Physicians for Social Responsibility, I authored the world’s first detailed reports linking climate change to human health. The reports were among those that inspired former Vice President Al Gore, who quoted from them in his and Davis Guggenheim’s documentary An Inconvenient Truth.

Social and environmental justice are intrinsically interconnected, so what at first might seem like disparate efforts are really united. It is hopeful to me that younger generations have an awareness of the problems and a passion to solve them. It is estimated that over 1.4 million schoolchildren participated in the Global Climate Strike this year. An estimated 4.5 million people are expected to be at WorldPride 2019 in New York City.

Even with such impressive demonstrations of people power, environmental and political forecasts often seem dire. But like that day in my youth and the balmy morning at the Stonewall Inn on June 28, 1969, we can take a stand to change “fate” and turn things around for the better.