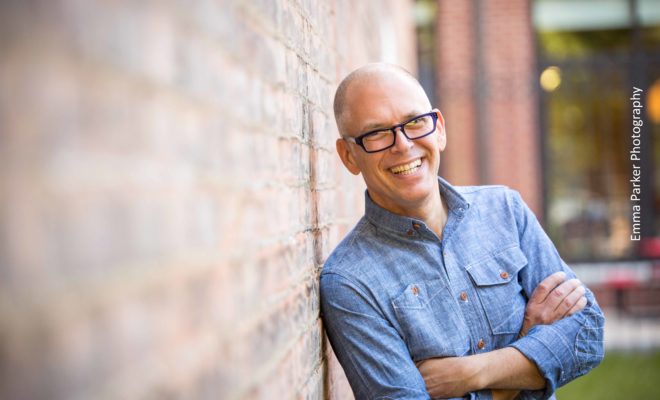 Although not necessarily given as a piece of advice, one thing my mother told me has always stuck with me. She told me to never change how I care for and treat my friends, the people I care about. I strive to keep that value at the heart of everything I do.

As the winning plaintiff in the Supreme Court marriage equality case (Obergefell v. Hodges), Jim cemented his place in history as a civil rights icon who wanted nothing more than to love his partner with equal dignity under the law. Jim is an accomplished businessman and now continues to pay it forward with his Equality Vines wine label, book tour and more, with proceeds supporting the community.

(Editor’s Note: The following narrative is in Jim’s own words.)

I was fortunate. When I came out to my family at the age of 26, they reacted with love and support. My father, a late 60s blue-collar Catholic, responded by saying all he ever wanted was for me to be happy. I wish every scared LGBTQ person experienced the same, but they don’t. As a white, cisgender gay man, I understand the privilege I enjoy even in a society that still treats LGBTQ people as less than human in many ways. Every time I speak, I share my conviction that every person, every human being, deserves the right to live their true life without apology and without fear.

I want every member of our community to know that I see them, I believe in them and I fight for them. I’ve testified against religious refusal bills in front of a congressional panel, I’ve helped fund a program for homeless LGBTQ youth and I’ve written several editorial pieces about the LGBTQ fight for equality. I serve on the Board of Directors of SAGE because I know LGBTQ elder Americans – the people on whose shoulders I stand – too often age in isolation or in places that force them back into the closet.

I co-founded a wine label, Equality Vines, that is dedicated to equality for all. Every wine supports an organization fighting for equality. Our wines currently support LGBTQ and women’s rights organizations, with a line for immigrants’ rights coming soon.

The legacy I helped create – my last name has become shorthand for marriage equality – came about because I made promises I had to keep. After marrying my partner of 20 years as he lay dying of ALS, we sued the state of Ohio to demand recognition of our marriage on his death certificate at the time he died. That lawsuit eventually reached the Supreme Court as part of a consolidated case with more than 30 other plaintiffs, where, in their decision on Obergefell v. Hodges, the Supreme Court made marriage equality the law of the land.

I never planned to become an activist, but living up to my promises to love, honor and protect my husband was the only thing I could imagine doing. I fought for love, dignity and equality. I fought for what was right and just. Since the ruling, I’ve been honored to have countless strangers share their stories, their photos, their joy that their relationships now matter. I’ve shared in tears of happiness and sadness, knowing how many never lived to see marriage become a reality for them. I’ve officiated many weddings, both same-sex and opposite-sex, because joining two people in marriage is a great honor and a reminder of what the other plaintiffs and I fought for.

I continue to be involved with organizations fighting the attacks on marriage equality following that ruling and LGBTQ equality in general, including Equality Ohio, SAGE and Lambda Legal. We have much work to do, and I will not be silent.