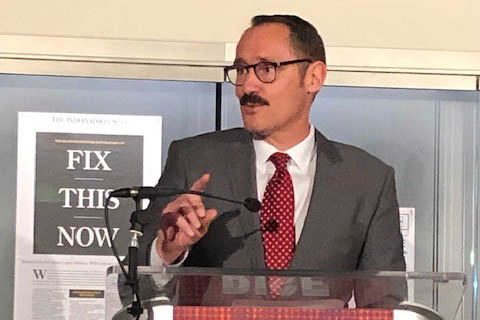 Different is better than better. This means we should embrace the things that make us different instead of focusing on trying to be better than someone else. Stop comparing, let others have their thing, and amplify the unique qualities that set you apart.

(Editor’s Note: The following narrative is in John’s own words.)

My passion to connect businesses with the LGBTQ community started with a setback when I was downsized for the first time in my career. I was two years into the advertising job I had been aiming for since college, working on a major account at a big ad agency. But I hated it. My client-facing role forced me to straddle the closet door, since coming out could kill a career then. It was stifling.

After being displaced, I gained the freedom to find a path where I could balance being “out” with my career goals. I recalculated my route and found The Isosceles Group, a small agency connecting brands to LGBTQ consumers through purpose-driven marketing. At the time it was revolutionary. It ignited my passion to bridge the LGBTQ community and the corporate world, creating congruence between them in the same way I did within myself. We channeled corporate resources to critical causes that some of our clients had never heard of before. Beyond funding, companies had platforms that could be leveraged to make enormous changes in the community. I took this passion and started my own company, Open Door Marketing, continuing to focus on the mission of connecting these two worlds. I never looked back.

In 2005, I left San Francisco for Washington, D.C. to lead corporate development for The Human Rights Campaign (HRC). It was exhilarating to work with companies to impact national LGBTQ issues at a time when momentous change was happening. One day I would be sitting in a boardroom making the case for trans-inclusive health benefits to a reluctant CEO, the next I’d be working with a wine sponsor on a fundraising event. It was all about identifying and directing resources for the benefit of LGBTQ progress. Keeping that momentum, I wanted my next leadership role to be at a company with a strong LGBTQ commitment. Wells Fargo was that company.

There is infinite power in storytelling, and I’m proud to be on the team that in 2015 created a national TV commercial that told the story of a lesbian couple learning sign language as they prepare to adopt a deaf child. In 2017 we launched a campaign focused on four national LGBTQ non-profits and their impact. It reached millions of people, raising visibility for the needs of the most vulnerable members of the community. This year we’ve woven the 50th anniversary of Stonewall throughout our sponsorships and marketing, including our first campaign featuring a trans woman.

Recently when I was on my way to NYC to speak at Advertising Week, I recalled my early career in advertising keeping me trapped in a closet, afraid to be myself for fear of derailing my career. But, here I was going to address an audience at an industry event as an out, gay man, proudly talking about respectfully connecting brands to LGBTQ consumers. I hope that my legacy is that other LGBTQ people will never have to fear being themselves at work and that companies recognize the power that freedom brings.